Alan McKenzie (アラン･マッケンジー Aran Makkenjii) is a minor character in the Original Series, consisting of Beyblade: V-Force. His Bit-Beast and Beyblade is Impluse.

Alan is a fellow classmate of Max's. Both lived in the same neighborhood in New York and grew up to be good friends. Max going to live with his father in Japan severed their friendship though. Years later in 2002, Max flew back to New York City to participate in a small tournament and see his mother. The two of them met again and learned that they could battle against each other in the tournament.

The night before the event though, the ancient rock which held many bit-beasts was stolen from Judy's lab. When Tyson caught up with him by bike, Max, who was coming towards them, walked into the thief and discovered it was Alan. The latter did not explain his actions then; he told Max, when the tournament started and that they faced, that if he could beat him, then the truth would be revealed.

Although they first tied, Max won the other battle and Alan spilled it out: a woman had come up to him and asked him to steal the ancient rock; for that, he would get a very strong Beyblade. Alan was interested in owning a better top, because he was jealous of Max being one of the world champs, while he was an amateur blader. Therefore, he agreed to do the task.

After the match though, he realized the blade was not so good anyway. Max and him became good friends again. 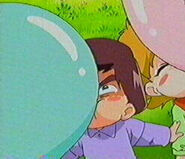 Alan and Max as kids

Alan and Max in the park 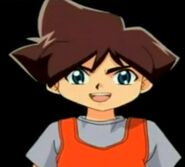 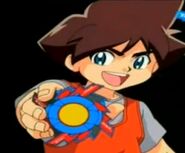 Alan and his Beyblade, Impluse.

Alan in his "battle" suit.

Retrieved from "https://beyblade.fandom.com/wiki/Alan_McKenzie?oldid=451140"
Community content is available under CC-BY-SA unless otherwise noted.