When in Rome... Beyblade!

Amphilyon (アンフィリオン Anfirion) is an Anime Exclusive Spin Gear System Beyblade. It is owned by Enrique in the Original Series.

Amphilyon is a cyan Beyblade with a Bit Chip depicting Amphilyon. It has a bi-symmetrical Attack Ring, that closely resembles Amphilyon's heads. The Weigh Disk could either be an Eight Balance or Eight Heavy. Like most of the Beyblades featured in Beyblade: 2000, it contains a Right Spin Gear. The Blade Base is bi-symmetrical and shaped like Amphilyon's tail. The design is similar to the Attack Ring. It is an offensive Beyblade, made for powerful attacks but has low endurance. 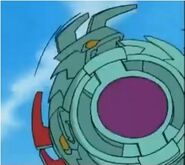