The face on this beyblade depicts "Aquarius", the eleventh astrological sign in the Zodiac, and one of the 88 constellations.

The Aquario wheel was released primarily in multiple shades of blue, and was originally only obtainable through random boosters (which are now nearly impossible to obtain), and the Attack/Balance conversion set. Takara Tomy then rereleased the wheel in Metal Explosion pakaging along with pre-HWS Aries. The wheel its self is basically an exact replica of Hyper, aside from there being no Energy Ring. It has 4 awkwardly rounded wings that provide competitive smash. These wings have a little water-flow pattern on the sides, increasing smash. The Pegasis wheel is shaped in basically the same way, aside from the fact that Pegasis has 3 wings. This gives it more prominent smash, thus outclassing Aquario. Newer Hybrid Wheel System and 4D wheels also beat out Aquario, but it still remains a viable part of competition. It is a top-tier wheel for attack when used with the Right On Left Method.

DF145 has four upward facing blades protruding from the top of the Track, which aside from giving it extra weight are meant to push air downwards. It is now outclassed for use in Stamina combinations. Instead, tracks such as AD145, 85, 100, 90, and even just a simple 145 are used.

SF is wider than Sharp but not as wide as any Flat Bottom. It produces a movement pattern that, while it is aggressive, is much slower than any Flat Bottom. The increased friction with the stadium floor due to the wider tip both increases its Defense and Stamina in comparison to a bottom similar to S or ES. However, it is in absolutely no competition with bottoms similar to WD for Stamina or RS for Defense. Semi-Flat is meant to be used in Balance type Beyblades, as it combines aspects of Attack, Defense and Stamina. 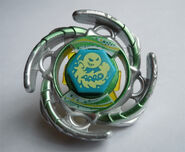 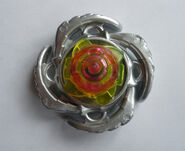