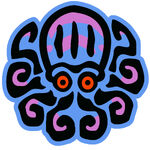 The Stone Face depicts the Kraken, a squid-like sea monster from Norse mythology. It features the Kraken's light blue face, with several tentacles all around it. The motif is featured on a ruby Stone Face.

Unlike most of the other Chrome Wheels, Kraken possesses a design which is generally well balanced. Indeed, on one side of the Chrome Wheels, a series of curved lines in the shape of tentacles can be seen in the design, and after a short interruption created by a trapezoid protrusion, the same series of tentacles are reproduced, however, mirrored. At the other side of the trapezoid, the orb from the Crystal Wheel can be seen, surrounded by a design which resembles the beak of an octopus. The wider parts of the tentacles accumulate near the edges of Kraken, leaving only deeply engraved lines near its center.