Arthur Lawrence (KANJI, ROMAJI) is a character appearing in the anime series, Beyblade Burst Evolution. He is the owner of the Royals, a team competing in the World League, and his Beyblade is BEYBLADE. 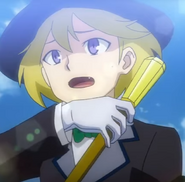 Retrieved from "https://beyblade.fandom.com/wiki/Arthur_Lawrence?oldid=339774"
Community content is available under CC-BY-SA unless otherwise noted.