Axel (バルトロメ Barutorome) is a minor character from the Original Series, consisting of Beyblade: 2000. He is a member of the Savage Slammers. He received his Beyblade from a Tortoise.

He received his Beyblade when he helped out a turtle, and him and the turtle became good friends. He encountered the Bladebreakers and Tyson Granger in the Second Round (B-Block) of the American Tournament. Tyson becomes swept up in Axel's pace and ignores his team's pleas to calm down and focus. Axel continues to rile Tyson up with stories about his tortoise friend and Tyson lets his temper get the best of him. However, after Ryu Granger yells at him, Tyson snaps out of it. Tyson sees Axel staring at his Beyblade and realizes that Axel may be weird, but when he is focused on his Beyblade, he is just like any other Blader. Tyson channels his energy into his Beyblade and uses the Phantom Hurricane Attack to sweep up all of the water in the dish, as well as Axel's Beyblade.

Axel uses an Initial System Beyblade called Tortoise Grenade. It is army green and resembles a tortoise's shell. It mimics the defense of a tortoise, with it's added stability, weight and hard shell. 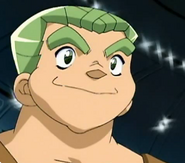 Add a photo to this gallery
Retrieved from "https://beyblade.fandom.com/wiki/Axel?oldid=406576"
Community content is available under CC-BY-SA unless otherwise noted.