This article is about the Hasbro release. For the Takara Tomy release, see Bakushin Susanow 90WF.

Bakushin Susanow 105F is an Attack Type Beyblade released by Hasbro on November 9th, 2010. It was bundled with the Walmart Collector's Edition of the Beyblade: Metal Fusion video game.

The Susanow Face Bolt depicts "Susanoo", the Shinto god of the sea and storms in Japanese mythology. Susanoo makes up the majority of the design, with the sea below his head.

Susanow is a round, symmetrical Energy Ring, with stylized letters spelling "Susanow". Susanow has average weight distribution, but it is not heavy (or light) enough to find use in Defense or Stamina Type combinations. Furthermore, Susanow is not uneven and thus cannot provide aggressive movement for Attack Types. Susanow is easily outclassed by other more recently released Energy Rings.

105 is the fourth lowest Spin Track height available, but is outclassed in terms of Attack and Stamina by the 85, 90, and 100 Spin Tracks. 105 has no problem with floor scrapes, but is still an outclassed part and should only be chosen when none of the aforementioned Spin Tracks are available.

Flat (F), as the name implies, has a flat plastic tip, which gives it an offensive movement pattern. Flat has a hard time retaining a flower pattern due to it being made of plastic, which results in it having less grip to the stadium floor than a rubber Performance Tip such as Rubber Flat (RF). 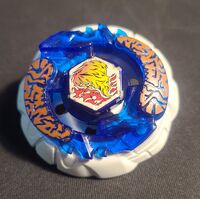 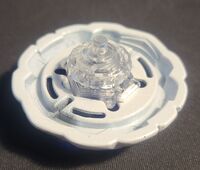