Susanow's Face Bolt depicts Susanoo, the Shinto god of the Sea and Storms, brother of Amaterasu, the goddess of the Sun, and Tsukuyomi, the god of the Moon in Japanese myths.

Susanow's original release coloring is blue with brown lettering that states Susanow (it is not very clear but it can be seen) while this one is black with silver lettering. It has an average weight distribution, but is not heavy enough or even light enough for Defense and Stamina customizations, also it is not uneven enough to provide a more aggressive movement for Attack Types, and is easily outclassed by other Energy Rings. But it is still one of the heaviest Energy Rings. It looks similar to the Nemesis Energy Ring. It is black in colour. Attack: 4 - Defense: 3 - Stamina: 0

Bakushin is a low-recoil highly defensive wheel with good stamina properties. It does not do all that well in attack customizations due to its lack of any major points of contact, and its smooth circular edge profile, but that is partially why it shines in defensive combos.

The main reasons why it does so well as a defense type wheel is the overall shape and profile of the wheel itself. It is a low-profiled bowl with a great, smoothly curved outside edge, and it is almost perfectly circular as well. It works well with Clear Wheels that further compliment this profile, such as Leone/Leone II, or very low-profiled Clear Wheels like: Horogium, Pisces, and Cancer to name a few. It performs better than Basalt as a defense combo, when compared against the same Basalt combo (i.e. both wheels on BD145CS), Bakushin, has a higher win rate against today's top attack wheels such as Variares and Blitz. This is because there is much less for the opposing bey to grab onto, and due to the highly slanted edge of Bakushin, the attacks from Variares/Blitz/Beat glance off with little to no effect at all. It is also much harder to KO as compared to Basalt, despite Bakushin being 15g lighter in weight.

The proficiency of this wheel has gone on relatively unknown since its initial release due to its limited availability and expense/difficulty obtaining it. Those that did/do have the Wheel, for the most part, did not and still do not use it because of its collectability and painted surface, as to not cause damage the finish. Because of the combo it comes as (90/105WF) those that did use the wheel only tried Bakushin as an attack customization, which of course does not work well for reasons already mentioned. This caused the wheel to continue on, unnoticed and swept under the rug as another "cool, yet bad beys that are for collecting, with no competitive use" much like Mercury. This all changed in August–September 2011 when members of the WBO decided to conduct heavy testing on the wheel and discovered its defensive prowers. It is black in color. It is worth noting that Bakushin does not protect the clear wheel form scratches and chips, so using tall heights is advised.

90 was the lowest Track until the release of 85 with Mercury Anubis 85XF. Its low height is good for both low Attack customizations and low Stamina customizations, but is outclassed slightly in both regards by the aforementioned 85. It was released in a booster pack in Screw Capricorne 90MF. It was first released on Quetzalcoatl 90WF. It is dark purple in color. If knocked, it has a high tenancy to scrape the stadium so it is best used with Flat tips only.

Wide Flat, is a Flat tip which is twice the size of its counterpart, "Flat", Wide Flat is fast but has poor grip, and struggles to hold a flower -like pattern, it was used with one off the previous destabilizes "MF L Drago 90WF", which is now outclassed, it still holds a few more uses.

Wide Flat used to be the widest plastic Flat tip until the later release of XF (Extreme Flat). It is a dark purple in color. 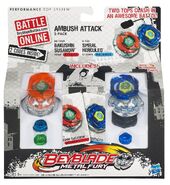 Retrieved from "https://beyblade.fandom.com/wiki/Bakushin_Susanow_90WF?oldid=375512"
Community content is available under CC-BY-SA unless otherwise noted.