The Stone Face depicts the Kraken, a squid-like sea monster from Norse mythology. It features the Kraken's light blue face, with several tentacles all around it. The motif is featured on a ruby Stone Face.

Unlike most of the other Chrome Wheels, Kraken possesses a design which is generally well balanced. Indeed, on one side of the Chrome Wheels, a series of curved lines in the shape of tentacles can be seen in the design, and after a short interruption created by a trapezoid protrusion, the same series of tentacles are reproduced, however, mirrored. At the other side of the trapezoid, the orb from the Crystal Wheel can be seen, surrounded by a design which resembles the beak of an octopus. The wider parts of the tentacles accumulate near the edges of Kraken, leaving only deeply engraved lines near its center.

A clear derivative of a "bandit", Bandid oddly does not have a design reminiscent of those characters. It vaguely illustrates some longer daggers, but it mostly complements Goreim's shape entirely: like the latter, this Crystal Wheel has block shapes with ridges in them. Its original color is green, however Bandid Genbull's release is navy blue.

As all Crystal Wheels in the Standard or Zero-G format, Bandid is heavily outclassed by the whole Synchrom possibility, and even by Metal Wheels from the Maximum Series and the 4D System. Even in the Limited Format, where it has an opportunity to be useful, other Crystal Wheels are preferred, especially Dark Knight and some heavier Crystal Wheels. Bandid should never be considered for competitive play.

125 is a midway between the 105 and the 145 Spin Tracks. Utilized in mid-height Stamina Type combos, it is more difficult to destablize compared to 145 height Stamina Type combos. It has declined in popularity due to the release of gimmicked Spin Tracks of the same height, such as Tornado 125 (T125) and Defense 125 (D125), which offer more weight and balance capabilities. 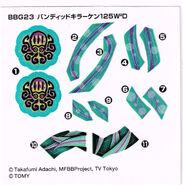