Befall The Ripper is a special move used by Jack and his Evil Befall UW145EWD.

Befall's feathers are flung by a strong whirlwind that acts as a vacuum cutter and launches the feathers all over the battlefield and slashes both the opponent and the stadium.

Another version is where Befall itself starts to have it's Spin Track glow which causes a pink energy to form around the blades and Befall either attacks the opposing Beyblade or simply slice the stadium. 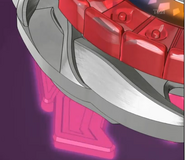 Retrieved from "https://beyblade.fandom.com/wiki/Befall_The_Ripper?oldid=300714"
Community content is available under CC-BY-SA unless otherwise noted.