BeyWarriors: Cyborg (Japanese: ベイウォーリアーズ サイボーグ) is the anime adaptation of the BeyWarriors: Cyborg toyline and the intended eighth instalment[1] in the main Beyblade anime series, to succeed Beyblade: Shogun Steel. However, as with past series BeyWheelz: Powered by Beyblade and BeyWarriors BeyRaiderz, this was commissioned to be a western-exclusive series and is the latest co-production between Nelvana and d-rights.

As of December 6, 2014, 14 of the 28 episodes have aired meaning half of the series total has been broadcast. It is currently on a hiatus until further notice.

As of February 27, 2015, BeyWarriors Cyborg is now available to watch in Original Japanese language on Anime Hodai, for Japanese residents only on the SoftBank Mobile contract. It will also be available on U-Next streaming service soon.

The newest series of the Beyblade saga is BeyWarriors Cyborg, warriors who resemble half-creatures and half-machines. Mysterious objects called "Beyraiderz" are found in the sanctuaries of Teslandia. The Cyborg Warriors transform the energy released from the sanctuaries into small objects called Tokens. Who will win more battles to collect the most amount of Tokens?[2] The series set in a future sometime around 22nd century, where humanity has colonized the space.

“Teslandia” is an abandoned planet, ignored by the rest of the nearby planets due to its harsh environment. The story begins when power spots containing high levels of energy called “Sanctuaries” were identified, and mysterious vehicle shaped items called “Beyraiderz” were found along with the Sanctuaries. Beyraiderz can synchronize with the youths under the age of 17 living in Teslandia, and summon the Cyborg creatures known as “Warrior.” The Warrior can transform high level “Sanctuaries” energy into small Tokens. This means that human beings are able to obtain energy by making the “Warrior” battle against each other to turn the arid wasteland into a lush and bountiful world!

So, who will win the most battles and collect the most Tokens? What mystery lies behind Warrior?

A group of invincible warriors with features of half-humans and half-machines can transform energy into small artifacts called 'tokens'. Who will win the battles now?

During May 2013 at the "Floor Plan" of the then-upcoming annual Las Vegas Licensing Expo 2013, Nelvana announced through it two, new television series placed under the working titles "BeyWarriors Cyborg" and "BeyRaiderz Shogun". BeyWarriors Cyborg was given a tentative "Fall 2014" release slate[3]. As previously seen with BeyWheelz: Powered by Beyblade, the anime is commissioned by Nelvana and produced by d-rights, being the latest co-production between the two companies.

On June 11, 2013, Nelvana revealed the series would consist of 28 episodes: 26 half-hour episodes and 2 one-hour specials[4]. It was also revealed to launch in over 80 countries with music composed by Catalin Marin[5], a newcomer to the Beyblade scoring scene taking over from Neil Parfitt and Scott Bucsis who have traditionally done the music for the last, four main Beyblade anime entries. It was also during this time that the series had entered post-production.

On September 9, 2013, a press release sent out by Nelvana confirmed "BeyWarriors BeyRaiderz" (originally known by BeyRaiderz Shogun) and "BeyWarriors Cyborg" as the near-finalized names of the aforementioned series with the latter confirmed again for its fall 2014 release window as well as to "include revolutionary new play patterns from Hasbro" and "lots of exciting new promotions"[6].

On April 4, 2014, Nelvana released their "MIPTV Newsletter" for the month promoting their most recent properties and revealing their programming plans for the years of 2015 and 2016. BeyWarriors Cyborg was nowhere to be found, suggesting that its planned release in the fall of 2014 has been postponed with a currently unknown date[8].

As of May 13, 2014, Nelvana has confirmed "Beywarriors Cyborg is still a production in development conversations" though its anime and toy line were acknowledged[9].

On May 21, 2014, Yoshihiro Nagamori, the character designer for the anime stated it was still in production and expressed his desire for it to air in Japan[10].

On June 1, 2014, Yoshihiro Nagamori reiterated his hope for a Japanese broadcast but explained that he does not know whether it is possible and while currently he cannot reveal any details about it, he may begin dropping hints should the series air in Japan[11].

On June 14, 2014, when asked why the series was delayed, Yoshihiro Nagamori stated that personally, he does not know[12].

A synopsis of the series was also released[16][17]

Despite this announcement, plans changed and without warning, K2 pulled the series from their schedules and as a result, the series did not air in September. It is unknown if the anime is intended to air on K2 at a later time.

Sometime in early-October 2014, the d-rights website completed a massive site renovation and released new information regarding the show. The final name for the show was confirmed to be BeyWarriors: Cyborg. They debuted two images, one of a series logo and another a promotional poster. An extended synopsis of the Italian one released in July was presented, revealing new plot details. The series was also discovered to be produced under "BWProject" which is the same project name they used for BeyWheelz. Interestingly, d-rights classifies the series as a program for both kids and teens, suggesting this anime will be aimed at an older demographic than previous Beyblade anime.

On October 12, 2014, it was discovered that the series is now set to premiere in Italy on October 18, 2014 on channel K2 at 7:30. The second episode will air the following day with new episodes airing every weekends.

Following disappointing Beyblade: Shogun Steel and BeyWarriors: Raiderz results,[18] Nelvana then dropped the series shortly after[19] and distribution rights of the show were given to d-rights[20] and because of this, the Hasbro toyline was cancelled. An English dubbed version started airing on Toonami Asia and Toonami India on October 3, 2015. While it hasn't been confirmed, it's been speculated that this dub was recorded in Hong Kong, rather than in Canada, like all other Beyblade series has been. The Japanese version of the series began streaming on February 27, 2015 on the Anime Hodai streaming service.[21] It was later streamed on U-Next.[22] The series would later receive Turkish and Tagalog dubs in 2016 and 2017, respectively.

In conjunction with the channel's then upcoming broadcast of Beyblade Burst, Disney XD in the United States acquired the catalog rights to the entire Beyblade franchise in late 2016.[23] This included BeyWarriors: Cyborg, though as of 2019 the series remains unreleased in North America. 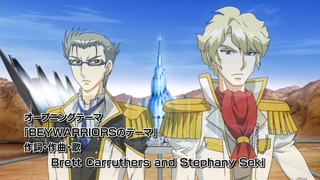 Retrieved from "https://beyblade.fandom.com/wiki/BeyWarriors:_Cyborg_(anime)?oldid=467552"
Community content is available under CC-BY-SA unless otherwise noted.