Like its predecessor, Nelvana commissioned it as a western-exclusive series, being a co-production with d-rights under the name "BRProject".

TV Equals compared BeyWarriors BeyRaiderz to Indiana Jones and Atlantis, calling it an animated and "less cheesy" version of the latter.[2]

BeyWarriors: BeyRaiderz follows three characters Sho, Jin and Leon, who are trapped in a strange parallel world. Once defended by the Six Mythic Beasts who upheld justice and brought prosperity to all through the battling Beyraiderz tournaments, this world has since fallen into decay and ruin following the disappearance of the Mythic Beasts. Now it’s up to Sho and his friends to uncover the hidden Beyraiderz stadiums, do battle with the enemy and bring the Mythic Beasts back to restore prosperity to the derelict world. 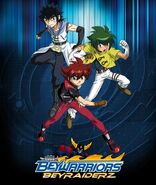 The cast of BeyWarriors BeyRaiderz.

Adult Swim?
Add a photo to this gallery

Retrieved from "https://beyblade.fandom.com/wiki/BeyWarriors_BeyRaiderz_(anime)?oldid=396878"
Community content is available under CC-BY-SA unless otherwise noted.