BeyWheelz[1] is an upcoming animated television side-series based on the upcoming Hasbro toyline; BeyWheelz. It is being directed and produced by Nelvana and d-rights and is due to air in countries outside of Japan in 2012.

The BeyWheelz series was unveiled at the Hasbro 2012 Toy Fair as a poster. Information was issued at the event, including that a BeyWheelz toyline would exist, and that this animated series would last for thirteen episodes, to fill in for the 13 episodes that were missing from the Beyblade: Metal Fury season.

BeyWheelz was also announced to air before the Metal Fury season begins, and will feature a whole new storyline and characters. Names for the characters were not given, but fans have began confusion that the characters resemble ones already existing (Yuki Mizusawa, Aguma and Kyoya Tategami).

The exciting new BEYWHEELZ chapter, which takes place in the futuristic city of Destection, where our hero, Sho, is champion of the BEYWHEELZ World Tournament! This peaceful city is home to exciting and challenging battles between friends and allies until suddenly the city is attacked by an evil BEYWHEELZ army called the Dominators.

So far the only info there is is that there are 3 main characters. 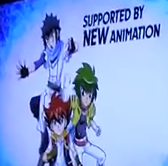 Retrieved from "https://beyblade.fandom.com/wiki/BeyWheelz:_Powered_by_Beyblade?oldid=145058"
Community content is available under CC-BY-SA unless otherwise noted.