Fire and Water (邪魔するな!, Don't Interfere!) is the sixteenth episode of Beyblade: G-Revolution.

As Max prepares to face Kai in the next round, the members of BBA Revolution overhear a confrontation between Johnny and Robert of the Majestics and Barthez Battalion. It turns out Barthez Battalion won their qualifying tournament through trickery. Thanks to Kenny, the teams find proof of Barthez’s underhanded tactics but it’s too late to disqualify them from the Championships.

Armed with his new Draciel Gravity, Max takes Kai to the edge of defeat only to end up defeated himself. Rick uses his frustration at the loss to overcome Tala and goes on to face Kai in a tiebreaker. Despite his great power, Rick loses to the more experienced Kai.

Inspired by the match, Tyson vows to face Barthez Battalion with everything he’s got. 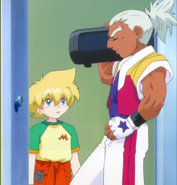 Add a photo to this gallery
Retrieved from "https://beyblade.fandom.com/wiki/Beyblade:_G-Revolution_-_Episode_16?oldid=402779"
Community content is available under CC-BY-SA unless otherwise noted.