Changing Gears (まだかよ!, Not Yet!) is the twenty-eighth episode of Beyblade: G-Revolution.

After Tyson and Daichi defeat Raul and Julia due to overpowering them with their own combination, they become pumped up for the final match against the Blitzkrieg Boys. Kenny and Hilary swipe both Dragoon and Strata Dragoon from Tyson and Daichi in order to make repairs after their tough battle.

In the other team room, Kai and his teammates watch the tag battle that was recorded. Tala, Bryan, and Spencer seem overconfident in taking on the BBA Revolution, thinking their blades won't be repaired in time for the match. Kai has second thoughts, telling his team not to take any chances. Or in other words, not underestimate their competition and they will lose for sure. He comes up with an idea and asks Spencer and Bryan for assistance.

Kenny and Hilary are both working hard on both Dragoons but Daichi continues to tell them that it doesn't need any cleanup. A brown cockroach jumps onto Kenny's nose proving their point in giving the Beys a tune up. Hiro barges through the door saying that both Tyson and Daichi need rest for the upcoming finals. Tyson acts stubborn decides he doesn't need sleep. While Hiro explains to them how important sleep is, they both drifted off to sleep. Hiro converses with Kenny and Hilary about the upcoming match, making Hilary unsure of herself whether or not they have what it takes to overcome the Blitzkrieg Boys. But the others are confident that the team will pull through and win.

The countdown to the final match makes the crowd excited. Before it starts, an exhibition match is thrown into play and some of the other teams who were eliminated join in. The PPB All Starz and White Tiger X who all competed against each other in a free for all. Emily's Trygator smashes into Mariah's Galux. Rick's Rock Bison jumps in to help protect Galux from being knocked out of the stadium and Mariah thanks Rick for the assistance. Both Beys attack Galeon and Trygle. Lee and Michael complain about Mariah and Rick teaming up when it was a every man for themselves type of match. By working together, Mariah and Rick sweep the part of the competition. But Mariah betrays Rick and knocks his Bison out of the stadium much to his disappointment.

Back at the team room, Kenny is shocked to notice Dragoon's engine gear assembly is severely damaged. Since Dragoon was made a long time ago, it's hard to find a another gear to replace the damaged one. He has no other option but to repair the current gear. It makes Kenny concerned that the Bey will not be fixed in time for the final match.

Ray and Max have a steady battle in an attempt to prolong the battle to give BBA Revolution more time to prepare. They both decide to end the exhibition match. But without any warning, Galux ambushes Driger and Draciel simultaneously with a stadium out. Mariah celebrates her achieved victory with a win.

After Hilary wakes Daichi up from his nap, she hands him his Strata Dragoon in perfect condition. Daichi worries about Tyson's Dragoon as Hilary breaks the news to him. He promises to stall the battle so Kenny could have enough time to finish the Bey as he runs off into the stadium.

The finals between BBA Revolution and the Blitzkrieg Boys goes underway. The inside of the dome is pitch black with everyone around the stadium silent. DJ Jazzman gives an introduction to the first match which is Daichi vs Tala. While both bladers prepare themselves, the rest of the teams from both sides seem to be missing which angers Ryu, wanting to see Tyson out there. Tala exchanges insults with Daichi which aggravates them both.

Bryan and Spencer follow Kai through a dark hallway looking clueless as to what their objective is. Kai becomes annoyed due to meaningless questions they ask him. The three stumble upon a gray door and go inside.

Meanwhile, a new Bey Stadium appeared before the bladers called, Ganryu Island. Both sides are ready to begin. Both Strata Dragoon and Wolborg launch into the stadium with a strong start. Both Beys cancel each others attack, making Daichi think Tala has gotten stronger since the last time they battled. Wolborg gains the upper hand and keeps knocking Strata Dragoon backwards and off balance and does a barrage of attacks from multiple angles, slowing down Strata Dragoon's spin. But Daichi's Bey is running away instead of fighting back. Daichi continues to stall for time in hopes of Dragoon to be repaired faster, making him quite annoyed. Tala figures out Daichi's strategy and tries to end the match quickly as possible by having Wolborg use Novae Rog. Strata Dragoon starts to get bashed with ice projectiles and struggles to make a comeback.

Tyson wakes up from his nap as Kenny just inserted the gear back into the Bey finishing Dragoon. Wolborg pushes Strata Dragoon into the stadium wall leaving it vulnerable to attack. The rest of the BBA Revolution team shows up to support Daichi which allows him to give it his all. Clash after clash, the bey both seem to be equal in strength. Strata Dragoon uses Great Cutter while Wolborg uses Novae Rog again making both Beys collide creating a huge explosion within the stadium. Both Beys are knocked out of the stadium. The match ends with a draw, much to Tala and Daichi's surprise. 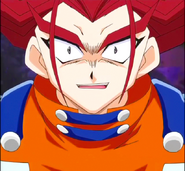 Add a photo to this gallery
Retrieved from "https://beyblade.fandom.com/wiki/Beyblade:_G-Revolution_-_Episode_28?oldid=431110"
Community content is available under CC-BY-SA unless otherwise noted.