Out of Their League (あやまれ!!, Apologize!!) is the thirty-third episode of Beyblade: G-Revolution.

Tyson, Max, Kenny and Daichi are invited by Boris to take a tour inside his new BEGA headquarters. Hilary isn't allowed inside until the official public opening, and is sent away, much to her chagrin.

The boys find that the BEGA building is unparalleled in the quality of its Beyblade training and facilities. Impressive as it is however, Tyson is still highly distrustful of Boris. Boris tries to convince Tyson that he's changed. Ever since his scheme was uncovered, he roamed throughout his homeland doing some soul searching. There, while watching some village children Beyblade, he had an epiphany. He realized that Beyblading is all about honor and individuality, and he made it his new goal to bring Beyblading to the masses. That's why he took over the BBA and turned it into BEGA – as a way to give children around the world that had no exposure to the game a chance to better their lives and become champions themselves.

Tyson is still skeptical, and his bad-mouthing of Boris draws the ire of another top BEGA prospect – a juggernaut named Crusher, whose Beyblade launcher is the biggest one the boys have ever seen. When grilled by Tyson about his motives for joining this professional league, Crusher admits he's doing it for the prospect of getting rich, but only so he can afford to pay his younger sister's hospital bills. A Beybattle ensues, and Crusher shows he's even more powerful than he looks.

Meanwhile, two BEGA professionals watch the fight from another floor. Eventually, one of them, named Brooklyn, senses Tyson's gonna win and leaves. Tyson is nearly defeated, but he summons his will and indeed narrowly defeats his jumbo-sized opponent, at the cost of Dragoon's attack ring, that gets severely damaged. When Boris asks Tyson if he now believes he's sincere in his reasons for creating BEGA, Tyson still isn't sure. But he does admit that if spirited and honorable Bladers like Crusher are in it, maybe there is some merit in the new league after all. Boris takes Tyson's hand and makes him touch his heart with it.

Meanwhile, Hilary continues her outrage by playing with some hammer arcade game. She hits it so strong that eventually one of the pieces is thrown far away. Then, Ming-Ming's voice comes out of the game to congratulate Hilary, saying that "she's almost as good as her", which enrages Hilary even more to the point that she starts smashing it. 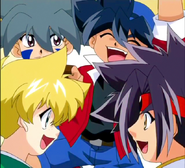 Add a photo to this gallery
Retrieved from "https://beyblade.fandom.com/wiki/Beyblade:_G-Revolution_-_Episode_33?oldid=431115"
Community content is available under CC-BY-SA unless otherwise noted.