The Mysterious Mystel (キミの名は…, My Name Is…) is the thirty-fourth episode of Beyblade: G-Revolution.

This episodes starts off in Ray's home village with Mariah chasing down her headband. She trips and falls and her headband floats in to the tree tops, but someone mysterious catches it and and rolls it up on his finger. Mariah is happy to see that that her bandana has been caught but she can not see the mysterious person all to well because of the glare in her eyes. She goes to rub them to get a better look but the mysterious person has vanished and left her headband tied up to a branch on the tree.

Later Ray is seen writing a letter to Tyson on his victory on becoming the champion again and saying he should come to his hometown and beyblade with them. Then his teammates walk in with some dumplings and they tell Ray about the mysterious guy that keeps popping up everywhere. Ray suggests that they go looking for him. The mysterious blader is then seen walking near a mountain side looking for food, eventually coming across fruit that grows on a bush on top of the cliff.

Then scene switches to Tyson's grandfather house where Tyson, Kenny, Daichi, Hilary, and Mr. Dickenson are discussing the Boris situation and whether he is good or evil.

Ray and the others are then seen playing a little game where they have to see who can get the fruit first. They all having a hard time reaching it when the mysterious blader shows up by jumping off a mountain and looks as if he was flying. He takes his mask off and reveals his face, he introduces himself as Mystel but Lee does not care and doesn't even like him. He goes to grab Mystel but Mystel easily dodges and flips away. Lee chases Mystel around because he insulted the whole team, but Lee could not chase him as he was too fast for him.

Ray and Lee then talk about how they were close to getting their beyblades up the top of the mountain and how Mystel got his bey up there. Mystel then comes in the fray and tells them he could teach them how to do it if they beat him in a beybattle. Lee is the one to accept the challenge and Mystel shows them his his beyblade Poseidon.  Lee loses the battle and then it is Ray's turn to beyblade Mystel. At first, Ray has no chance of beating Mystel but he comes up with a plan to beat him while Mystel was doing his fancy moves. Ray does his special move, but as that happens, Mystel slips off the mountain and Ray catches Mystel and it ends as a draw. After the battle, Lee apologizes to Mystel for the way he acted before.

Mystel then tells Ray and Lee about BEGA and that Tyson has just become their newest recruit. Both of them are dumbfounded by these revelations and are left wondering about it. As the sun sets, Mystel offers the White Tiger X some of the fruit from the cliff as a peace offering before leaving. At that moment, Ray decides to leave with Mystel, much to the disbelief of his friends, especially Lee. Ray explains that he's definitely intrigued with Mystel's story, and he points out that although the part about BEGA is true, the part about Tyson being involved is mysterious enough to find out for himself. The rest of White Tiger X understand Ray's choice and let him go. The episode ends with Mystel and Ray leaving as a wind blows into Ray's house and the pages of his letter to Tyson scatter. 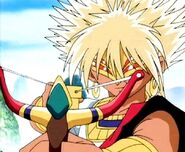 Add a photo to this gallery
Retrieved from "https://beyblade.fandom.com/wiki/Beyblade:_G-Revolution_-_Episode_34?oldid=431116"
Community content is available under CC-BY-SA unless otherwise noted.