It's Nice to See You

Pros and Ex-Cons (おまえに会えてよかったぜ, It's Nice to See You) is the thirty-fifth episode of Beyblade: G-Revolution.

Tyson can't seem to make up his mind whether or not to trust Boris and go pro. When the team is visited by a rabid pack of sponsors who want to sign them to product contracts, Grandpa is forced to step in and recommend that Tyson have a talk with his more experienced brother, Hiro.

Meanwhile, Boris discusses the possibility of having Tyson on his team with Garland and Brooklyn.

While looking for Hiro, Tyson and friends come across Tala, Bryan and Spencer, who are on their way to get revenge on Boris by bringing the BEGA league down. Tyson is torn between following Tala, and respecting Tala's wish that he stay out of it.

At BEGA headquarters, Tala, Spencer, and Bryan confront Boris and demand to face his top Beybladers. Boris accepts their challenge, but puts them up against some first-level recruits instead to make them feel overconfident. This doesn't work, since they knew how easy the team was to beat. After Tala and the Boys have defeated the BEGA team, Garland jumps from a balcony and challenges them to a battle. Boris promises to dismantle the league if they beat Garland, but they have to join his pro league if Garland beats them. Tala refuses the deal and thinks to himself Boris would never put so much at stake if he wasn't sure of Garland's capabilities. However, Garland wants to battle anyway as a point of pride.

Tyson and the gang arrive just in time to see Garland defeat Bryan and Spencer in a two-on-one battle, melting parts of their beyblades. Tala is next and the episode ends with him saying "damn you" to Garland. 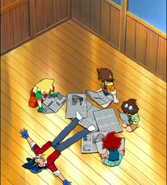