BEGA on the Rise (地獄を見るぞ, Look to Hell) is the thirty-eighth episode of Beyblade: G-Revolution.

Boris shows Hiro his beybladers for him to coach, and Hiro takes an interest in Brooklyn, whom Boris introduces as "BEGA's most powerful weapon".

Meanwhile, Tyson and his friends find themselves unable to practice because Boris has cornered the market on new parts and Kenny is still working on the new Beyblades. Daichi decides to get out and demand Boris to let go of the monopoly, but accidentally hits Hilary on his way out. Hilary is angry and hits him in the head with her bag full of supermarket goods. Hilary then tells them that she saw some kids bullying another child for not being a member of BEGA, which gives them all a bad feeling that children are abandoning the true beliefs of Beyblading for BEGA's rising popularity.

Meanwhile, Boris is satisfied with the progress of his top Bladers, who are training heavily in a series of practice and exhibition matches. Ming-Ming easily dispatches the amateur team that the Blitzkrieg Boys faced before falling to Garland. Mystel is shown easily defeating ten beybladers at once, only to disappear completely later, to which Boris does not get upset about, since he knows "great bladers cannot be tamed". Crusher visits his ill sister at the hospital and she gives him a small token built after him, leading him to tears and inspiring him to win his next match.

Back at BEGA's training facilities, Kai and Garland have a practice match. As their beyblades clash, the beybladers themselves engage on a physical fight, with Kai effectively blocking Garland's every move. Eventually, Kai hits Garland in the face, causing some blood to drip from his mouth. The match ends in a tie, with both sides correctly deducing their opponent did not give everything he's got.

Later, Hiro coaches Brooklyn into performing better launches, and Brooklyn is able to destroy one rock by attempting a simple shot. Garland and Kai watch from the building and Garland is shocked as he explains to Kai that Brooklyn has never trained a day in his life. He is from a totally different level and that even Garland himself was never able to be more than a good warm up for him.

Later, Kai deduces Hiro only joined BEGA to force Tyson to get stronger and that he is now amazed with Brooklyn's talent. Hiro confirms that Brooklyn is unbelievably powerful and Kai is no match from him, which Garland later endorses in the corridor. Still, Kai wants to battle him and find more about such a powerful blader. 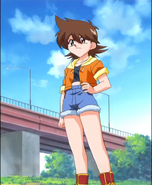 Add a photo to this gallery
Retrieved from "https://beyblade.fandom.com/wiki/Beyblade:_G-Revolution_-_Episode_38?oldid=383855"
Community content is available under CC-BY-SA unless otherwise noted.