When You Wish Upon A Star (ミスターXだ!, It's Mr. X!) is the forty-second episode of Beyblade: G-Revolution.

Kai's attack causes no effect on Brooklyn's blade, and Brooklyn then copies it, effectively hitting Dranzer, much to everyone's surprise. Kai tries his best to take command but it seems Brooklyn mirrors his every move. Brooklyn starts slamming Kai's blade, with every hit hurting Kai's own body. Hiro shows up behind Kai and explains to him that Brooklyn is from a whole different league and that Kai will never reach his level. Kai want to prove him wrong so he can have a chance of taking on Tyson and launches a full force attack on Brooklyn, setting his Dranzer on fire. However, Brooklyn simply cancels his attack and releases his special attack, King of Darkness, which submerges Kai in a sea of darkness, only to knock Kai unconscious meter away, shattering Dranzer to pieces.

So the BEGA Bladers' team has been picked, now it's up to Tyson and his crew to pick a team. After much discussion about it, they all agree it should be up to Tyson to choose, but Tyson doesn't say anything. Tyson goes out for some fresh air and Kenny goes after him. He deduced Tyson wanted Kai to rejoin the team, and Kenny unveils a Hard Metal Dranzer he developed. Just before Justice 5 begins, Tyson and his friends pay a still unconscious Tala a visit at the hospital. there, they meet Mr. Dickenson, who suggests they should be named the "G Revolutions". Before leaving, Tyson leaves the new Dranzer on Tala's bed.

As the tournament begins, they present only four Blader's, however, they finally reveal their fifth: 'Mr. X', which is actually just Grandpa in a mask. Now the first battle is about to begin and it pits Daichi against Ming Ming. 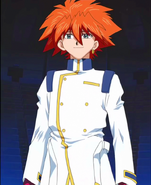 Add a photo to this gallery
Retrieved from "https://beyblade.fandom.com/wiki/Beyblade:_G-Revolution_-_Episode_42?oldid=431124"
Community content is available under CC-BY-SA unless otherwise noted.