Welcome to My Nightmare!

Welcome to My Nightmare!

Welcome to My Nightmare! (この負け犬が!, You Underdog!) is the fiftieth episode of Beyblade: G-Revolution.

Since Justice 5 ended with each side having two wins and a tie, a sixth, tie-breaking match will be held so that they can settle the challenge. Tyson (the one who's going to battle in the final match) and his friends pay Tala a visit at the hospital, where he still lays unconscious. When Tyson promises to win for Tala, that is when Ray, Max, and Daichi realize that Tyson may be actually convincing himself and they say that they believe in him.

Meanwhile, Brooklyn is still depressed over his first defeat ever. Boris is disappointed with Hiro's performance as a coach. Garland says Boris should just worry about offering a good entertaining competition for the fans, and Boris throws some sheets of paper on his face. Garland offers himself for the final battle, but Hiro turns him down cold and heads for the training room where Brooklyn's on the brink of a breakdown. It's up to Hiro to get him back into fighting form.

Meanwhile, Boris has taken matters into his own hands and dispatches Crusher and Ming-Ming to knock Tyson out before he even has a chance to battle the BEGA Bladers. Both bladers consider this cheating, but Boris angrily reminds them it was him who paid for Monica's health care and who made Ming-Ming a popstar, and now it's time they return the favor. They reluctantly leave, while Mystel watches from afar.

Back to Brooklyn's training room, he starts getting back to beyblading and vows to make the G Revolutions pay for his defeat. Garland leaves the room, feeling sick with so much power and Mystel appears behind a window, about to tell Garland something important. Meanwhile, Tyson contemplates on his final battle with BEGA, as Kenny and Max work on some strategies for him while Lee and Ray do some meditation and Rick and Daichi are asleep.

Crusher and Ming-Ming attack Tyson's house and have part of it collapse. This alerts everyone, who quickly realize what's going on. Rick and Lee step in to protect Tyson. Eventually, Crusher starts losing it as his mind is still confused about helping Boris cheat. When Tyson opens his defense completely, deliberately leaving himself open for a smash hit, Crusher has Gigars stop as Garland and Mystel arrive and he and the rest of BEGA Bladers realize they are all on the same side, even with the G Revolutions. Crusher apologizes for his actions and all is right for now. Before leaving, Garland warns Tyson that Hiro is coaching Brooklyn and he will be stronger than ever as he's relied on his natural ability up until now, when he realizes that he can tap into his emotions for more power.

Brooklyn trains some launches and makes several holes at the wall of his training room, until he ultimately breaks through the ceiling, opening a hole through which one can see the sky. Brooklyn is thinking about getting revenge on Kai, while Hiro becomes worried about Tyson's last BEGA challenge. 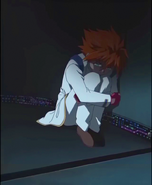 Add a photo to this gallery
Retrieved from "https://beyblade.fandom.com/wiki/Beyblade:_G-Revolution_-_Episode_50?oldid=437862"
Community content is available under CC-BY-SA unless otherwise noted.