The New Team Dungeon (新生! チーム・ダンジョン, Shinsei! Chīmu Danjon) is the 14th episode of Beyblade: Metal Fury and the 116th episode of the Metal Saga.

Aguma, who received Johannes invitation along with others, gets introduced to The Black Sun and the rest that happened to them is unknown. Elsewhere, Gingka and his friends, who visited Greece, head through ruins to find a Legendary Blader holding onto Variares D:D, Madoka then finds out that the Blader that caused the wreckage is heading to America. Elsewhere, Masamune is "completely stoked" about the Legendary Bladers and begins intensive training with Toby and Zeo when suddenly, Tsubasa appears. Zeo and Toby show their new Beys to him and use it against him. The coach comes out and showed Masamune a drawing which has pictures of himself on it. Masamune then cheers loudly for the battle in the gym which makes the coach really angry. The battle starts with Tsubasa attacking Toby but Toby uses the Eternal Defense 145 Spin Track to evade the attack. Zeo then delivers an uppercut which causes Tsubasa to counter. Similarly to the attack on Toby, Eagle is dodged by Fox due to the Triple Roller 145 Spin Track. Toby and Zeo then use unpredictable hit-and-run and barrage attacks, respectively caused by the shifted gravity of the Spiral Fusion Wheel on Tsubasa. Tsubasa decides to end this by calling his ultimate Special Move; Shining Tornado Buster while Toby and Zeo counter with their Special Moves Crush String and Buster Tail, respectivly. Coach Steel shouts at Tsubasa, Toby, and Zeo for using their Special Moves in his gym considering the dangers of using them which stops the battle between Toby, Zeo and Tsubasa leaving the battle with no outcome. Benkei, Kyoya, Yuki,Madoka and Gingka head on a plane going to America for the Destroyer Dome tornaument. 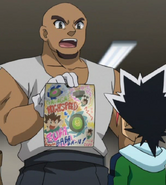 Retrieved from "https://beyblade.fandom.com/wiki/Beyblade:_Metal_Fury_-_Episode_14?oldid=435888"
Community content is available under CC-BY-SA unless otherwise noted.