The Monster's Identity (怪物(モンスター)の正体, Monsutā no shōtai) is the 28th episode of Beyblade: Metal Fury and the 130th episode of the Metal Saga.

Kyoya ends up battling with Yu. The monster, provoked by their intensifying battle, attacks suddenly but then flees into a maze of stone walls, Kyoya and Yu run after it but the monster knows the maze well and teases them when it can. The monster flees but this time, Yu and Kyoya launch their beys, Fang Leone and Flame Libra at two places in one wall behind which the monster is running; the hit wall bricks collapse, trapping the monster in its tracks. The monster runs another way but once again, the wall bricks collapse. Kyoya and Yu approach the monster, Kyoya yells at it and in fear, the monster takes off its large mask, revealing it to be small boy. The small boy's name is Titi, Yu befriends Titi immediatly.

Death Quetzalcoatl in the preview 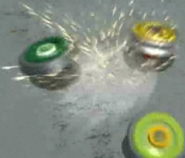 Retrieved from "https://beyblade.fandom.com/wiki/Beyblade:_Metal_Fury_-_Episode_28?oldid=159457"
Community content is available under CC-BY-SA unless otherwise noted.