Meanwhile, Benkei is seen practicing with his Dark Bull in order to try and defeat Gingka when he meets Tetsuya for the first time.

Kenta challenges him to a Beybattle, but during the fight Tetsuya gains the upper hand and cheats to win. However, just then, Gingka's Storm Pegasus comes striking through Tetsuya's Gasher before he can destroy Sagittario. Despite Kenta defying Gingka's rule not to battle Tetsuya, Gingka isn't mad and tells Kenta that he did the right thing sticking up for his friends. This is when Tetsuya recognizes Gingka after being told about him by Benkei.

Gingka tells Tetsuya that it's wrong to do that and Beyblading is about having fun and not scratching other people's Beyblades on purpose. Tetsuya challenges Gingka to battle, who refuses to battle someone like him. However, Tetsuya implies that he kidnapped Madoka and put her in a hole filled with live crabs all around her. He tells Gingka that if he wants to save Madoka, he'll have to beat him in a Beybattle.

Gingka, Kenta and friends arrive and battle in Tetsuya's own "crab" stadium. To make things more challenging, Tetsuya decides that they must win 2 out of 3 battles to save Madoka. At first, Gingka gains the upper-hand and wins a battle. But then, crabs start coming out of the stadium and stop Pegasus from spinning, making Tetsuya win the second battle and leaving Gingka flabbergasted at losing.

Long ago, Tetsuya and his friend Echizen were having a Beybattle. However, another Blader named Taraba asked to challenge Echizen. Echizen was scared, so Tetsuya filled in for him. However, he was too strong for Tetsuya and lost along with his Gasher being scratched. After that, Tetsuya found out that Echizen abandoned him. Tetsuya was so mad that he vowed to never make friends again. Due to this, he decided to scratch other people's Beys because of what Echizen had done to him. He even went so far as to destroying both Taraba's and Echizen's Beyblades while having his crabs brutally pinch them.

Gingka then gets an idea to use the ledge of the stadium to strike Gasher out of the stadium. Then he uses a Special Move Tornado Wing (inspired by Kyoya's Lion Gale Force Wall) that wipes all the mud and crabs away and strikes Gasher. Madoka suddenly appears after Tetsuya goes back on his promise to free her. Benkei also shows up, with Madoka revealing that he saved her from the crabs. Just when the gang was about to say something to Tetsuya, he runs away shouting "Crabby-crabby-crabby!" 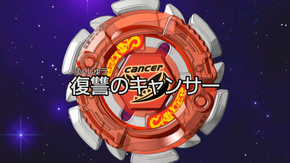 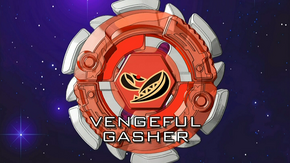