In the semi-finals, Blader DJ announces the next match, Kyoya versus Ryuga. It will determine the final match for Battle Bladers. Meanwhile, Kyoya and Benkei are walking to the match. Kyoya has a flashback of his battles with Gingka and is prepared knowing that he will give it everything he's got in order to defeat Ryuga and then, Gingka. They step outside to the tournament, where Gingka and the others greet them. Gingka wishes Kyoya good luck in the match and is waiting for their battle. They fist-bump and Kyoya gets ready to battle while Gingka and his friends cheer him on in the audience. Ryuga soon gets ready and tells Kyoya that there is no chance that he will win. Kyoya tells him that he will defeat him quickly so he can fight and defeat Gingka. However, Ryuga uses L-Drago's power to taunt Kyoya by crumbling the stadium to pieces. They get ready their Beylaunchers and launch. Kyoya's Rock Leone fights fiercely against Ryuga's Lightning L-Drago. Ryuga uses a Dark Move, thinking he will defeat Kyoya in one shot. He's wrong as Rock Leone dodges it and uses a special move. Madoka learns that Kyoya is only slowing down L-Drago and if it stops, Kyoya could lose. Gingka cheers Kyoya on regardless. In spite of Ryuga attempting to defeat Kyoya easily, Kyoya stands up and fights back. Ryuga is surprised at this and keeps trying to defeat him. Leone jumps onto L-Drago as the beasts fight. Kyoya tells Ryuga he should fight the right way instead of using the power L-Drago gets when it defeats an opponent. Ryuga takes up Kyoya's challenge and accepts but tells him that he will regret it. The Bey's fight by using their own power and with each hit of the Bey, an explosion emerges. Madoka is worried as if Kyoya keeps fighting like this, Kyoya could possibly lose his energy. The battle is so fierce L-Drago seems not to have an effect on Leone. Kyoya then attempts to surprise-attack Ryuga and more explosions occurs. Ryuga turns insane that nothing is happening and tries to deliver a direct hit at Leone. Madoka tells Gingka that Leone and L-Drago are reaching the end of their Stamina. Kyoya tries to finish L-Drago but suddenly, the beast of L-Drago, Dragon Emperor comes out of the Bey and faces Ryuga. It transfers it's power into Ryuga and with this a huge explosion occurs. Ryuga turns insane and looks a bit like a beast and with this L-Drago fights back against Leone. Kyoya holds nothing back in order to defeat Leone. In one final clash, the Beys heavily destroy the Battle Bladers stadium. Kyoya is determined to finish it once and for all as he Ryuga get ready for one final clash to determine the winner. With this crash, both Kyoya and Ryuga unleash new special moves: King Lion Furious Blast Shot and Dragon Emperor: Soaring Destruction. After the fierce clash, Gingka and the others rush to see who won when the see that Kyoya's energy is being drained by L-Drago meaning that he lost. 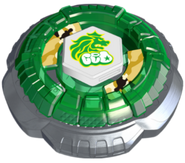 Add a photo to this gallery
Retrieved from "https://beyblade.fandom.com/wiki/Beyblade:_Metal_Fusion_-_Episode_49?oldid=283905"
Community content is available under CC-BY-SA unless otherwise noted.