View source
watch 01:40
Boba Fett Returns - The Loop
Do you like this video?
Play Sound

Gingka and his friends meet a new Blader named Masamune Kadoya. Masamune is a new Blader who joins Gingka's group and will stop at nothing to defeat him. The WBBA sponsors the new "Beyblade World Championships", a world tournament where four representatives from each country around the world gather and battle to become the world champions. When Gingka, Masamune, Tsubasa and Yu are chosen as the representatives of Japan, they won't hold anything back to become the world champions! Kyoya was chosen but turned the opportunity down, as he wants to battle Gingka, and joins the African Team along with Benkei who masquerades as the Masked Bull. They must then secure the spot of being the strongest Bladers in the world! 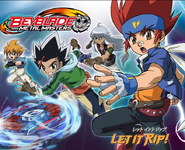