The game takes place after the "Beyblade World Championship" tournament that occurred in the anime and follows a new tournament of the same name where each Blader in the game receives a letter from a mysterious person named Agito to enter, in order to determine the best Blader at a place called "Dyna Cemetery". Players select a Blader to battle as and fight in four rounds with two matches each to win the tournament.

This entry of the Beyblade video games has a similar format. Players duke it out while Beyblading on the Nintendo DS. It features over 30 characters to play as, 37 characters to battle, and 2-player versus mode via Nintendo Wi-Fi Connection. Players can utilize Special Moves from the anime in-game via voice commands as well as having the ability to enter codes found on Hasbro Beyblades that will allow players to use its parts in the game.

You stand in an imposing arena, face-to-face with your competitor, Bey in hand. You know his reputation. He's never lost a battle; he always crushes his opponents with pure brutality; there is not a trace of fear in his eye. Though beads of sweat roll down your face from exertion, you are equally fearless. You have a secret weapon that no one could expect — a game-changing combo attack that could blow the reigning champ right out of the arena. Could you become the next Master of Beyblade?

Throw down the gauntlet and prepare for an all-new battle in Beyblade: Metal Masters. This time, the action is more intense than ever before as you fight to prove your mettle when it comes to Metal. All the action from the addictive Beyblade TV series bursts into life as you find yourself in fierce competition against some of the most infamous characters from the arena. Assume the role of one of 36 different Beyblade fighters and step up to the challenge, utilizing combos and special moves to devastate your opponents. Pick off your rivals one by one as you climb through various Battle modes, then throw in some fresh challenges by changing the settings. Settle the score and find out which of your friends truly is the Metal Master by dueling it out in a 2-player Battle Mode via wireless. Ready to really bring the Bey action to life? 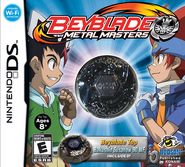 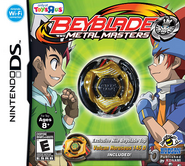 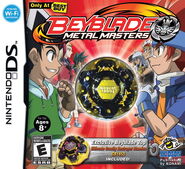 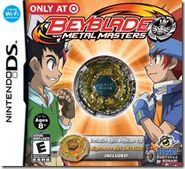 With Nightmare Rex at Target 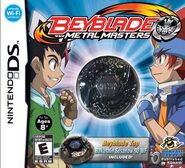 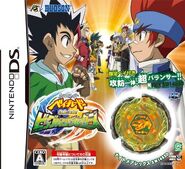 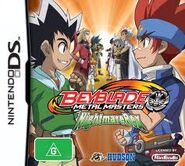 Retrieved from "https://beyblade.fandom.com/wiki/Beyblade:_Metal_Masters_(video_game)?oldid=422659"
Community content is available under CC-BY-SA unless otherwise noted.