The Beyblade: Shogun Steel series (Japanese: メタルファイトベイブレード ZERO-G, Metal Fight Beyblade Zero-G), is a Beyblade anime, manga, and toyline series. It first launched on March 31, 2012 by Takara Tomy in Japan, and is due for launch in 2013 in other countries.

It was the last series under the Metal Fight Beyblade Name, and as its name states, it revolves around the "Zero-G". Along with this series, came new products, such as new Beyblades, different product codes, and other new merchandise.

The toyline was first revealed via the Strongest Dragonis 4D Guide, released on January 20, 2012 in Japan, with confirmation of the anime and manga series arriving with CoroCoro Comics in February 2012.

Beyblade: Shogun Steel introduces, a new concept to Beyblade; Zero-G (short for zero gravity). While not in its traditional sense, it introduces new BeyStadiums with a gimmick. The gimmick being the Stadiums itself, when Beyblades are launched in it to battle, the Stadium literally tilts around and sways; causing the Beyblades to dash around the BeyStadium to somewhat emulate: Zyro gravity.

The Beys in the series focus on three important aspects.

Compared to the three previous series where Beyblades shared a constellation motif, Zero-G instead swaps this for a mythical creatures motif. This can be seen with its first two releases, Samurai Ifraid W145CF and Shinobi Saramanda SW145SD. Which are based on the ifrit and the mythical salamander, respectively.

A new system arises in the series as well, with new parts introduced. The parts consist of a Stone Face, Chrome Wheel, Crystal Wheel, Track, and Bottom. Tracks and Bottoms are interchangeable with other previous releases, while the Chrome and Crystal Wheels and Stone Faces are not, since they are new parts.

The Beyblades take a more radical and detailed design, which first began in the 4D System. While now, it is more in-depth with the mythical creature it is based on with details and designs usually features on its Stone Face and Chrome Wheel. Samurai Ifraid is a good example, as an ifrit is depicted on its Stone Face and fire details with an ifrit's head on its Chrome Wheel.

They are so detailed, that asymmetrical designs are now emphasized as well.

The series introduces never-before-seen Beyblades, and other merchandise; such as, Synchrom Boosters, Random Boosters, and new Beyblade sets.[1]

Much like with it's predecessors, Beyblade: Shogun Steel features an anime adaptation based on it. Set seven years after Beyblade: Metal Fury, it follows a new main character, Zyro Kurogane in his adventures to become the next No. 1 Blader in order to meet and battle his idol, Gingka Hagane. It debuted on April 8, 2012 in Japan on TV Tokyo, and is due to air in 2013 in other countries.

A manga series was made as well, based on the aforementioned anime series starring Zyro Kurogane and Samurai Ifraid. It takes place seven years after the events of Metal Fury, where Zyro, the Blader of Fire's journey begins as the new hero of Beyblade, with the same basic storyline as the anime; despite various things that differ. 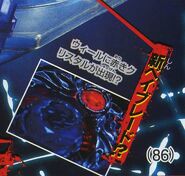