The Crimson Challenger
The Power of Bonds

Zyro, Shinobu and Maru visit Tsubasa and Madoka at the headquarters of the WBBA and are informed about the Synchrome system. Shinobu learns that Zyro's Samurai Ifrit was given to him by Gingka Hagane, which leads to Shinobu leaving the group.  The next day, tag team battles are being held at the Bey Park. Shinobu faces off against various Bladers and beats them all, including his partner. Next a new fire type Blader named Ren Kurenai battles against several bladers and, like Shinobu, beats all of them, including her partner. But she uses her own version of Zyro's special move. This upsets Zyro, so he challenges her to a bey battle. The episode ends with Zyro and Ren launching their Beys for battle!

Zyro and Ren launch their beys and Thief Phoenix starts copying Samurai Ifrit's moves. Ren uses Zyro special move and sends Ifrit flying, but Zyro stops it from landing out of the stadium. Zyro tries to attack Phoenix, but its spin track stops it from getting attacked. She uses Zyro's move again and Samurai Ifrit is getting pulled in again. Zyro tells Shinobu that he can only be his Synchrome parnter because he helped Zyro master Ifrit's special move and helped Zyro gain all the power he had. Ifrit dodges Phoenix and Zyro uses his special move, Burning Uppercut, sending Thief Phoenix out of the stadium. Benkei tells Shinobu to stop worrying about worthless things and focus on his dream if he want to surpass the Legendary Bladers. Shinobu asks Maru to contact the Unabara brothers for a rematch. They accepted the battle and arrive at the Bey Park. They put together a Synchrome beyblade again and Zyro puts together one with Shinobu creating a new bey: Salamander Ifrit. They launch their beys and Salamander Ifrit starts pushing back Orochi Leviathan. Kite starts getting angry because he had no data on the bey, and he makes Orochi Leviathan go into the middle of the stadium. Zyro makes Salamander Ifrit spin around the stadium and Kite uses his special move, Spiral Crush. Salamander Ifrit gets pulled into special move, but Zyro powers up Salamander Ifrit and cancels out Kite special move. Salamander Ifrit spins around the stadium fast and Orochi Leviathan is getting pulled toward Ifrit. Zyro creates a new Synchrome special move, Super Burning Uppercut, and sends Orochi Leviathan out of the stadium. Zyro thanks Shinobu and Salamander for their help and Kite gets angry for not having enough data to win. He tells Zyro they will win next time and Zyro tells them that he will battle them anytime they want. He also tells them to have no penalty games and also to help build a new era together. Ren becomes interested as well in building a new era. 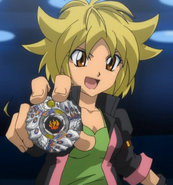