At a beach called Midsummer Beach, a group of people are telling one-another urban legends. A man tells them of a monster that is said to lurk around Midsummer Beach. The monster is said to come out of the ocean and attacks anybody in sight. It resembles a dark and beastly ghoul, covered in seaweed with glowing red eyes, flashing. The man then concludes that it is just an urban myth and they should not worry, with a laugh of relief following. However, a monster then comes out of the water and attacks the people, calling it the monster they spoke of.

The next day, Zyro and Co. have decided to go to Midsummer Beach for some rest and relaxation, to take their mind off Beyblade. Everyone has put their swimwear on, all very happy and playing at the beach. Benkei however, commands Zyro for more training, despite Zyro's refusal. Telling him that in order to become the best, he'll still have to do more training.

Zyro accepts anyway as he is told to tie a rubber wheel with rope on his waist and run with it. Shinobu wants to follow as well, then soon enough, everyone else does. They all do their best to pull their weight until Madoka voluntary throws the volleyball at Zyro's head. Zyro picks it up and soon after, a game of volleyball starts with everyone in the game. Benkei instead plays with a fellow crab, curious of it. Meanwhile, Tsubasa relaxes himself at the top of a cliff drinking something. Next, they dress up and go to have some drinks. They all discuss the wonderful and fun dayoff they had, enjoying their refreshing cold beverages, while Tsubasa does sailing.

The sunny day turns to dark when the gang find a plate full of sandwiches. Knowing what to do next, they enjoy dinner as they eat their large delicious sandwiches. Benkei, already in his Bull Burger costume, has second-thoughts on the sandwich, until he eats one however.

Finally after that, the gang relax with the boys sitting on the sand and the girls running off on the sand. They start to hear strange words coming from the water. Then, the sea monster reveals itself, scaring the girls that they let off a yell to alarm the boys. The boys speed to the sea monster, startled as well. A strange thing seems to be dashing underneath the sand from the monster. As it reaches towards the girls, Shinobu counteracts it by launching Ninja Salamander. It stops the monster and retreats to the blue ocean, with Kite having a plan.

The next day, the girls lay down on benches while the boys hide away, part of the plan. Just according to plan, the sea monster rises from the deep blue and comes closer. Just then, the sea monster is trapped and their plan worked. A person is seen and takes off the suit, revealing that their really was no sea monster to begin with. He explains who he is, Kikura Gen, and what he does around Midsummer Beach. Although Zyro and Co. are confused. Then, we see Tsubasa fishing, but the fish is too strong, and he is pulled off of the cliff.

Zyro and Co. have just met the true identity of the "sea monster," Kikura Gen. Upon their unusual encounter, the gang discuss what they should do, now that they've met him. Kikura stops them there and tells them his back story. The reason why Kikura poses as a sea monster, is because he cares deeply for beaches. However, beaches have become infested and inhabitable because of the trash and litter the people recklessly throw on the ground and in the water everyday. Kikura only cares for the beach, and he'll never stop posing as the monster unless people care for their beach.

Zyro thinks he should Beybattle Kikura to stop his terrible goals, yet Kite believes he himself should challenge Kikura. Kikura agrees to the challenge and the gang move to a water-esque BeyStadium to do battle. The competitors "Go Shoot!" and the battle begins. Maru studies Kikura's Beyblade, known as Pirate Kraken A230JSB and discoveres something that will make the battle hard for Kite. Kraken uses the A230 Spin Track, which blocks low-attacks such as from Kite's Guardian Leviathan 160SB.

A230 not only gives Kikura the advantage, but stalls the battle completely. The Beybattle, originally a fight becomes a sleep-out where Kite and Kikura wait impatiently for their opponent's Beyblade to stop spinning. Outside water even retreats to the BeyStadium and causes no effect. This causes everyone else besides Zyro to enjoy some summer fun rather than the boring battle. A wave then splashes over the stadium, causing both Beys to lose the battle. Zyro then yells out randomly and commands the battle to end, with no winner due to no result, at anytime soon. Zyro tells Kikura that he will fight him next, this time with a result of him winning the Beybattle.

Zyro and Kikura ready their Beys and launch into the Stadium. As hard as the battle was on Kite and Leviathan, it's the same with Zyro and Ifrit. Only worse because Samurai Ifrit W145CF has a lower-Track than Leviathan. During the battle, Kikura mistakenly reveals his Bey's one weakness; an attack from above. Zyro pulls through, and in order to end it: he commands Samurai Ifrit to take the skies and crash back down at Kraken and defeats it easily, also knocking it into the water. Kikura, realizing his defeat, then jumps in the water to save his Bey. Both Zyro and Shinobu comment on how the victory wasn't real because of the opponent telling everyone his weakness.

After the not-so-fearsome battle, Zyro and Co. pack their things and return back home to Metal Bey City. However, just as they leave the Midsummer Beach, Benkei and Tsubasa yell at the top of their voices but for Zyro and the gang have mistakenly left them behind.

Training at the beach.

Traning at the beach

Zyro after Madoka hit him with a volleyball.

Kite and Eight about to go surfing. 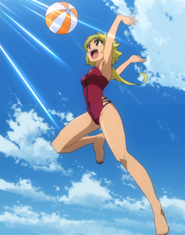 Sea monster at the beach. 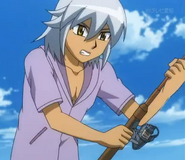 Tsubasa fishing.
Add a photo to this gallery

Retrieved from "https://beyblade.fandom.com/wiki/Beyblade:_Shogun_Steel_-_Episode_07?oldid=377970"
Community content is available under CC-BY-SA unless otherwise noted.