The Emperor of Ultimate Destruction, Bahamdia

Blader Gai offers another recap in the form of the recent match between Shinobu Hiryūin and Kira Hayama which resulted in not only wrecking the whole Zero-G Stadium, but Kira winning with his unexpected but new Beyblade, Gladiator Bahamdia SP230GF. This allowed Kira to advance to the finals of the tournament in which he will face off with the Blader of Fire, Zyro Kurogane of whom, was able to advance upon defeating Sakyo Kurayami. The match is expected to be held the next day as blimps fly throughout Metal Bey City to inform everyone of this historic event. A certain individual however, catches the glimpse of Gai as he stares in content to the announcement.

Over at DNA however, Team Garcias could be less than happy when they have called for a confrontation with their most powerful member, Kira Hayama. Upon his recent victory over the Invincible Salamander, Kira happened to wield a Beyblade other than Berserker Begirados SR200BWD: the Dragon-Killer and the strongest Stamina-Type in existence. When Kira used a different Bey in the form of Bahamdia, it shocked them as to concern as to why Kira was not using it and demanded a reason why. Kira, acknowledging Begirados, scoffs and smirks at it as he explains to them that he threw Begirados away. Kira was in search for something "more", something that offered something else than just being the best in Stamina, something that would satisfy his needs. The Garcias however are shocked to hear these words coming out from Kira, knowing that it had always been planned for Kira to use Berserker Begirados and nothing else, and the arrival of a new Bey completely destroys their had-been plan; even Yoshio Iwayama and Merci side with Kira, something that not only alarms the Garcias but commands the remaining DNA Bladers to assault Kira.

Spike Bourne, Genjūrō Kamekaki and Captain Arrow subsequently appear to launch out their Thief Zirago WA130HF, Bandid Genbull F230TB and Archer Wyvang 145WB at Kira. Despite this sudden three versus one match, Kira is not shocked when he launches out Gladiator Bahamdia with almost no skill that allows this one Bey to single-handily oppress the three. When Girago, Genbull and Wyvang fall down and lose-spin, their three owners are thrown back in response to the collision with Team Garcias thrown back as well. The God returns to Kira's hands as Argo Garcia is very frustrated and irritated at what Kira has done to them, something that Kira does not feel remorse for as he is prepared for the climax of Neo Battle Bladers.

Elsewhere, Tsubasa Otori and Madoka Amano study Gladiator Bahamdia's parts at the WBBA, very concerned over the power that it was holding when it wrecked havoc upon Shinobu and Shinobi Saramanda SW145SD. They are then given a video-call by Mal via her laptop to tell them about the effects of the battle on Shinobu. After the demolition of the Zero-G Stadium, Shinobu fell off and was heavily harmed. He had to be hospitalized which he is right at the moment and things do not seem to be looking very good for him. Shocked by this, Tsubasa and Madoka share their condolences toward Shinobu as Mal does the same, she also does announce at how Zyro has left in anger to a shipyard, enraged over Kira's win over Shinobu. As well as alarming them, Tsubasa holds his dear wishes that Zero is doing alright over it and the video-call subsequently ends.

At the shipyard however, Zyro is shown in one of the most enraged moments of his life. Undergoing extensive and harsher training than the wrecking ball with Benkei, Zyro has his Samurai Ifraid W145CF to bring full-blown collisions to various metal obstructions left on the shipyard. With every blow and collision that Ifraid inflicts, Zyro only blooms with a hated anger when his temper becomes too high that the scorching aura of him rages to a very powerful point. As Zyro continues his marathon of anger, the Unabara brothers watch in contempt and their utter-most concern for their friend. They see how Zyro is pushing himself to the limits in order to defeat Kira and even the thought of Kira adds much, more anger to Zyro that he cannot control (this can be related to a past event to previous main protagonist, Gingka Hagane before in the 13th episode when Gingka burst into anger when Ryuga mentioned his father) and can only let it out with this collision-course he is driving.

With much, more clashes that Ifraid undergoes, Zyro goes full-throttle on the next one when Samurai Ifraid W145CF heads toward the next objective but an outside force clashes in with the Bey to bring about another collision. Quickly alarmed, Zyro seems to have calmed down his forceful rage when his Ifraid returns to his hand and he finds an individual standing at the top of a cliff. Shocked, Zyro sees the individual jump off and land swiftly on the ground, bringing the return of the great Blader, the Blader of the Season of Autumn, the No. 1 Blader in the World: Gingka Hagane. Gingka walks up to Zyro when he tells him of how he was spectating Zyro's match and discovers at how is he going up against Kira in the finals of Neo Battle Bladers, also introducing his new Beyblade, the God in the form of Samurai Pegasus W105R²F. While Zyro is just speechless at the thought of actually talking to his idol, Gingka also tells him that he remembers giving Zyro his Beyblade, Samurai Ifraid W145CF when he was a young boy, which also causes Zyro to remember. Gingka declares that he finds Zyro to be a very powerful opponent and that he would like to duel him so that he could receive more training prior to his upcoming match.

Accepting this, Zyro brings Gingka to a hole obstruction that he made in the shipyard in response to his anger over Kira's win against Shinobu. At the count of "Go Shoot!", Zyro's Samurai Ifraid W145CF is launched to combat Gingka Hagane's Samurai Pegasus W105R²F. When the Beyblades make contact, immediate explosions arise in response to much of the surprise at Zyro. Knowing to give it his all, Zyro has his Ifraid continue to battle when more explosions appear. As much of the mist clears, he finds that Ifraid and Pegasus have been pushed to a barrier; both showing equally powerful force which does not allow either Beyblade to move past one-another. As the Beys continue fighting, with Zyro's huge force of power, the Beys bring about another explosions that this time, throws back Zyro after the collision to have him knocked out.

Zyro finds himself brought to the middle of a galaxy as he is floating and meets Gingka there as well. Zyro is entranced at the moment, the beauty of it all and how he is actually battling his idol. With the red aura that Samurai Ifraid leaves out, and the blue aura that Samurai Pegasus leaves out, the two auras clash each-other in combat that brings forceful blows to each-other. Gingka tells Zyro that he admires Zyro's ambition to not be the No. 1 Blader in the World, but to care for his friends and do what is right and defeat Kira Hayama. With Zyro's friends, Shinobu Hiryūin, Mal, Eight Unabara, Kite Unabara, Ren Kurenai, Takanosuke Shishiya and Sakyo Kurayami; all these people that Zyro has met throughout his life, he shares a bond with them that allows him to reach anything. Gingka tells Zyro that he always hated to lose, but the bonds that he shared with his, own friends allows him to go past the limits and reach it. Amazed by this, the two Beyblades continue the clash when Gingka announces to Zyro that he shall give Zyro all of his "power" so that he may win against Kira Hayama the next day. Surprised, Zyro finds the colourful bonds speeding from Gingka and heading toward Zyro. As the bonds continue to come, the entranced moment ends.

Zyro finds himself awake and how the dusk of night has turned to day. He finds that Gingka has disappeared and Ifraid has stopped spinning, indicating that he lost and Zero takes a look at Ifraid. He stands up to find a blimp of Gai's announcement of the final match between he and Kira. Zyro is now ready.

Samurai Pegasus falling from the sky. 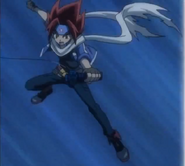 Merci telling the Garcia’s that they lost their position as leaders.

Tsubasa and Madoka looking up at Gladiator Bahamoote