The Reunion Begins (仕組まれた挑戦, The Devised Challenge) is the seventh episode of Beyblade: V-Force.

Tyson and Kenny try to determine what the mystery material was inside Snakey's Beyblade that made it so magnetic. Kai is tight-lipped after rejoining his friends following his draw against Dunga. Kai crashes at Tyson's place, but departs quickly after old grievances resurface, and Hilary suspects him of being a spy. Tyson and Kenny e-mail Max's mom, asking for help with their analysis of the mystery metal, while Hilary suggests visiting another person who could help them — Mr. Dickenson.

Upon visiting him at his office, they meet a new team called the Psykicks, led by the sinister Doctor B. This shady squad wants to challenge the Bladebreakers for the Championships title, but to become eligible they must defeat the BBA trainee team, which they do. Unbeknownst to the kids and Mr. Dickenson, however, it's Gideon who's behind this scheme to reunite the Bladebreakers. He wants all four members together in the same place so he can proceed with his yet-unknown plan involving Bit Beasts. Kai rejoins Tyson, and Mr. Dickenson puts out a call to Max and Ray. 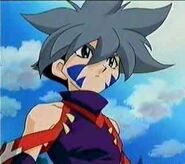 Retrieved from "https://beyblade.fandom.com/wiki/Beyblade:_V-Force_-_Episode_07?oldid=408267"
Community content is available under CC-BY-SA unless otherwise noted.