Tyson recuperates in the hospital after being rescued from the island where the Bladebreakers fought Team Psykick. Away from school, Tyson discovers he really likes it in the hospital until Hilary shows up with all of his homework assignments.

Meanwhile, Gideon, frustrated with his attempts to capture the Sacred Bit-Beasts, hatches a sinister new plan. He demands that Doctor B and his team create powerful new Cyber Bit-Beasts using the data they have gathered on the Bladebreakers. The only problem is that their data is incomplete. They need to analyze Kai's Dranzer to complete their plan because they lack data on him.

Across town, the Saint Shields gather and plot their own strategy to get the Bladebreakers Bit-Beasts. Dunga decides to challenge Kai to a surprise Beybattle because when he first battled Kai, it ended in a draw and Mariam teased him about this.

Meanwhile, Gideon's henchmen record the whole event. Kai and Dunga's battle ends in a draw but not before Doctor B acquires the necessary data to create the Cyber Bit-Beasts. 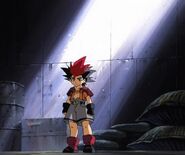 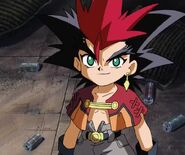 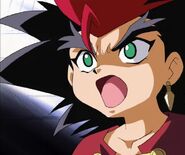 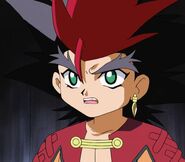 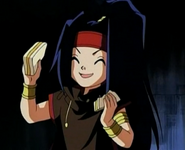 Add a photo to this gallery
Retrieved from "https://beyblade.fandom.com/wiki/Beyblade:_V-Force_-_Episode_12?oldid=432024"
Community content is available under CC-BY-SA unless otherwise noted.