Hilary's Bey-B-Cue (宿命のプレリュード, Prelude To Fate) is the seventeenth episode of Beyblade: V-Force.

After Dunga and Wyatt's battle, Dr. B realizes he doesn't possess the skill necessary to control his Cyber Bit-Beast. This frustrates Gideon, so he commands Dr. B to seek out a suitable candidate for the job.

Meanwhile, Kai seeks revenge on Team Psykick for what they did to Wyatt. Tyson is back home practicing his blading and quickly tires of it. The rest of the Bladebreakers (except Kai who isn't seen for the rest of the episode), including Hilary, keep on him to continue until he gets it right. But Tyson gets angry and walks out on the Bladebreakers. Max, Ray and Kenny soon follow suit and it seems that the Bladebreakers are finished.

Then, Hilary comes up with an idea. She tells the guys to take a day off and invites them to an afternoon barbecue. At first, Tyson wants nothing to do with it, but finally he relents and joins in and they all become friends again. After lunch, the kids relax by the river while Grandpa fishes. Suddenly, he hooks a big one and gets dragged into the water. The Bladebreakers run to the rescue, however, a group of four Beybladers appear out of nowhere and they rescue Grandpa.

After a brief conversation, the Bladebreakers realize these new kids are Bladers, so Tyson challenges their leader, Kane, to a Beybattle. After a fierce fight, it ends in a tie and the new kids leave. Tyson thinks he made a new friend, but as it turns out, Kane and his friends are the new members of Team Psykick. 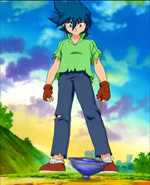 Add a photo to this gallery
Retrieved from "https://beyblade.fandom.com/wiki/Beyblade:_V-Force_-_Episode_17?oldid=417189"
Community content is available under CC-BY-SA unless otherwise noted.