Their Own Private Battles

Their Own Private Battles

Each with Their Own Battles

Their Own Private Battles (それぞれの戦い, Each with Their Own Battles) is the nineteenth episode of Beyblade: V-Force.

After seeing the power of the Cyber Bit Beasts in Team Psykick’s BeyBlades, Tyson vows to do whatever it takes to beat them. Even if that means breaking the rules and modifying his own Beyblade. Ray protests and demands that the Bladebreakers play fair even if the odds are against them.

At the Psykicks' lab, Goki is the second to give in to the power of the Cyber bit-beasts. He is given the Cyber Dranzer and tests it against Jim.

In a quiet moment down by the river, Ray runs into Salima of Team Psykick and discovers she feels the same way as he does. Salima tries to convince Ray to get the BladeBreakers to forfeit their upcoming match and even offers to reveal the secrets of the Cyber Bit Beasts in return. They agree to meet the next day. Ray tries to convince his friends to forfeit the match. Ray gets to the meeting point, but Salima doesn’t show up, since she was caught by Kane trying to take a Cyber bit-beast. Instead, Kai shows up and talks to Ray about the upcoming match and how they should do whatever it takes in order to win and avenge Wyatt.

Back at the Psykicks', Kane convinces Salima to accept her Cyber bit-beast and confront the Bladebreakers, so that they can prove they will not be controlled by the creatures. Ray waits until the early morning, but since Salima didn't show up, Ray changes his mind and decides to accept the challenge.

Meanwhile, the Saint Shields discuss the situation and Ozuma decides to intervene in Tyson's attitude. 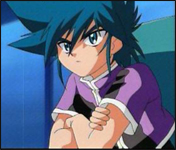 Salima gives the beyblade to Kane

Add a photo to this gallery
Retrieved from "https://beyblade.fandom.com/wiki/Beyblade:_V-Force_-_Episode_19?oldid=430544"
Community content is available under CC-BY-SA unless otherwise noted.