The Power Half Hour!

The Power Half Hour!

The Power Half Hour! (明日への決意, Determination to Face Tomorrow) is the twentieth episode of Beyblade: V-Force.

Tyson is so determined to beat the Psykicks in an upcoming battle that he's ordered Kenny to modify his Dragoon beyond legal specifications. But because his blade now has too much offensive power, Tyson is unable to control it and he becomes totally frustrated with himself and his blade. The more he tries controlling it, the worse he becomes. His friends try to tell him that cheating isn't the way to win, yet Tyson ignores them and he goes off to sulk about his dilemma.

Meanwhile, the Psykicks are with Doctor B who informs them that he just wants to do some last minute finishing touches on their Cyber Bit-Beasts. Both Kane and Salima protest, saying they feel that the blader is more important than any stupid Cyber Bit-Beast. But once they go into battle and feel the Cyber Bit-Beast's power, they are immediately hooked for life and want more.

While this is going on, Tyson wants to get back to training but Ozuma shows up. He says he has come to teach Tyson a lesson about Beyblading. Tyson tries to call out Dragoon but Dragoon ignores him. Tyson loses quickly and his new blade is destroyed. Tyson then realizes that cheating is not the way to go and Dragoon refused to appear because he was cheating. Tyson tells Kenny to turn Dragoon back to normal which he does. Tyson says that he is back to the way he used to be and he calls out Dragoon. 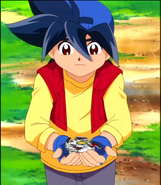 Add a photo to this gallery
Retrieved from "https://beyblade.fandom.com/wiki/Beyblade:_V-Force_-_Episode_20?oldid=415131"
Community content is available under CC-BY-SA unless otherwise noted.