The Bladebreakers travel by helicopter to their rematch against the Psykick's. During the flight, Hilary remembers how Team Psykick trapped her and Kenny on a cargo ship; Max ponders about their recent training; Kai regrets the Psykick's mistreatment of Wyatt; Ray recalls the time Salima reached out to him; Tyson remains bitter about Kane joining Team Psykick.

When they arrive at the battle location, a five story building called "The Battle Tower", they're greeted by Gideon on a video screen, who outlines the format. One each floor, one Psykick awaits a different Bladebreaker, and each match will be a one-match-only battle. When Mr. Dickenson objects to this format, a squad of blade bruiser mega-shooters launch a hailstorm of Beyblades. The Bladebreakers rip their Beyblades against the blade bruisers — until they realize it's only a plot to weaken their blades before the real battles.

More blade bruisers launch more Beyblades, but a surprise appearance by the Saint Shields help the Bladebreakers escape the first floor and ascend to the second floor. There, they are confronted by Jim, who faces off against Max. Cyber Draciel looks like it's going to win, but Max's determination spurs a comeback and Cyber Draciel is defeated. Or so they think. Team Psykick has a trick up their sleeve; a Cyber Bit-Beast repairing system restores the fallen Cyber Draciel. 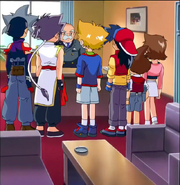 Add a photo to this gallery
Retrieved from "https://beyblade.fandom.com/wiki/Beyblade:_V-Force_-_Episode_21?oldid=430555"
Community content is available under CC-BY-SA unless otherwise noted.