Beybattle at the Bit-Beast Corral (戦場の遊園地, The Amusement Park Battleground) is the thirty-seventh episode of Beyblade: V-Force.

Fed up with all the recent attempts by Zagart and others to acquire the Bladebreakers bit-beasts, the Saint Shields decide to take action. They challenge the Bladebreakers to a match at an abandoned amusement park at the outskirts of town.

The Bladebreakers spend the night discussing the match, while the Saint Shields make one last training session and vows to fulfill their mission.

In the amusement park's Wild West area, Mariam and Max are the first to engage in battle. The match goes back and forth as their bit-beasts take giant form and thrash about the Wild West saloon. It ends in a draw, and while Max laments his draw, Ozuma harshly asks Mariam if she is still aware of their mission. He also says that Joseph and Dunga are supposed to back Mariam up when at his signal.

Max and Mariam go for another round. Over the course of it, Max's bond with Draciel makes Mariam realize she and her bit-beast Sharkrash share an equal closeness. Max's determination not just to win, but to fight for the return of Ray's bit-beast Driger culminates in Mariam's defeat. But she's not as upset as losing as she thought she'd be. Mariam realizes how much Max has taught her about treating her own Bit-Beast with respect, and how the determination of an entire team can overcome any obstacle.

She says she feels confident that Max and the others are capable of protecting their bit-beasts, but Ozuma says that he doesn't think so. 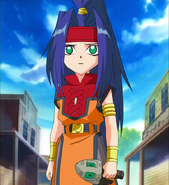 Add a photo to this gallery
Retrieved from "https://beyblade.fandom.com/wiki/Beyblade:_V-Force_-_Episode_37?oldid=430599"
Community content is available under CC-BY-SA unless otherwise noted.