The Spark Battle of Fate

Dunga goes into battle against Kai and the fight intensifies as the blades race along the rails of an abandoned roller coaster to what looks like their doom. But suddenly, Joseph launches his blade and both Dunga and Joseph gang up on Kai. But just when things start to heat up, Ray launches his new blade to try to even the score.

As the battle rages, the roller coaster collapses part by part around all the blades. The roller coaster chart starts riding and eventually falls out of the structure, exploding and creating a wall of fire. A subsequent rain puts the fire out.

Eventually, some energized wires threaten Dranzer, Vortex Ape and Vanishing Moot. Ray breaks the power box's door and exposes the power switch. However, before he can shut it down, Joseph stops him. When part of the roller coaster structure is about to fall on Ray, Driger breaks free from the rock to protect Ray and return to the Beyblade. Together, Ray and Kai defeat their opponents.

Ozuma steps up and warns Tyson his Dragoon will be the next to be sealed as the skies clear. 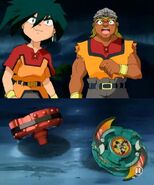 Add a photo to this gallery
Retrieved from "https://beyblade.fandom.com/wiki/Beyblade:_V-Force_-_Episode_38?oldid=417372"
Community content is available under CC-BY-SA unless otherwise noted.