Kuro to Shiro no Ma no Te

The World Beyblade Championships continue and the next round has Tyson and Max squaring off against Kane and Jim.

Kane and Jim decide to have a little practice battle at the beach. But King and Queen show up and in a surprise attack, they jump into battle and literally destroy Kane and Jim's Beyblades, forcing them to withdraw from the tournament and Tyson and Max to move on by default. In tears, they are later comforted by the Bladebreakers.

The next battle up is King and Queen facing Mariam and Joseph from the Saint Shields in a special stadium with magnets placed above and below the Beyblades, creating magnetic fields that provide a considerable obstacle for the competitors. Mariam and Queen launch first, and as they battle, King suddenly launches his blade, making it two against one. The officials are about to call off the fight when Joseph tells them not to and he joins in the fray.

In the end, King and Queen combine forces and first attack Mariam and then they team up on Joseph, destroying both of their Beyblades and stealing their attack rings. The battle is over, the crowd is stunned by this as they qualify to face Max and Tyson in the semi-finals. 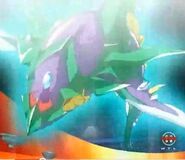 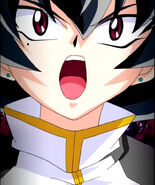 Add a photo to this gallery
Retrieved from "https://beyblade.fandom.com/wiki/Beyblade:_V-Force_-_Episode_46?oldid=424936"
Community content is available under CC-BY-SA unless otherwise noted.