As the Bladebreakers prepare for the next round, Kai tells Tyson that he'll beat Zeo so they can have their long-awaited battle in the finals.

The second semi-final round begins pitting Kai and Ray against Zeo and Gordo.

Ray faces Gordo first and attacks fiercely but Orthros always seems to evade Driger's attacks. Zagart has programmed all of the Bladebreakers moves into Zeo and Gordo's Beyblades, making them unbeatable. Soon, Driger is almost out of power and Gordo seizes his chance. But when Kai reminds Ray of the pain he felt losing Driger to Dunga, Ray taps into his Blader spirit and helps Driger salvage a tie.

Victory now rests on Kai's shoulders. Kai and Zeo begin a fierce battle, taking the fight to the stands and the video screen and unleashing so much power that the stadium begins to take damage. Kai gains more power when he remembers that he needs to face Tyson soon enough. The duel becomes a question of whose endurance is greater. As the effects of one final, powerful blast subside, Kai falls to Zeo and witnesses Dranzer being taken away by Cerberus.

Zeo and Gordo advance to the finals where they are expected to face Tyson and Max. 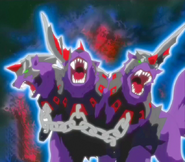 Kai! / You better not lose!

Add a photo to this gallery
Retrieved from "https://beyblade.fandom.com/wiki/Beyblade:_V-Force_-_Episode_48?oldid=412054"
Community content is available under CC-BY-SA unless otherwise noted.