Draciel of Approval (激突! マックスVSカイ, Clash! Max VS Kai) is the fifth episode of Beyblade: 2000.

The semi-final matches are announced, with Kai versus Max and Tyson versus Ray.

The arena is revealed to be a saucer bowl. The way to win in this arena is by being atop the tower for 10 consecutive seconds.This is a best out of three.

In round one, Kai easily defeats Max and takes him out with a single attack from above. In round two, Max launches his Bey in reverse, preventing Kai from using that attack. Kai, however, still attacks. Dranzer lands atop the Generic Bey, and eventually sleeps out. The Generic Bey however cannot take it and its bit-chip breaks sending it into a frenzy. It goes flying and hits Max, destroying the pendant his father gave him earlier. Inside the pendant was the Draciel bit-chip. Max has no other choice but to continue on.

In the final round, both Beys stand there for 10 consecutive seconds, making them go into overtime. They continue to fight, with neither giving up, as Draciel appears. Draciel sends Dranzer into the air. As Dranzer goes down, the Dranzer Bit-Beast appears. Both Bit-Beasts collide, but in the end, Dranzer wins, eliminating Max. But Max is proud to own Draciel, the Bit-Beast.

Later on at night, we see that Max, Tyson, and Kenny are relaxing in an old style hot tub. They hear noises in the woods nearby. They see Ray and his Bey practicing. 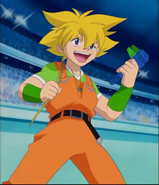 Retrieved from "https://beyblade.fandom.com/wiki/Beyblade_-_Episode_05?oldid=393469"
Community content is available under CC-BY-SA unless otherwise noted.