The qualifiers continue as Tyson, Kai, and a mysterious Blader Ray Kon have made it to the finals. Tyson, pumped up, gets confident as Max cheers him on in the finals.

Meanwhile, Kenny has Tyson's Beyblade, modifying it or else Ray will defeat Tyson easily, but Dizzi wonders why Kenny is staying up so late.

The next day, the battle at Seaside Stadium begins, with the announcers explaining about the Bladers, and the fearsome Driger. Ray, confident in his abilities, yawns and knows that he'll beat Tyson, but Tyson isn't ready to lose at this moment. The battle is almost about the start, and Kenny is nowhere to be seen, so Tyson is on his own in this fight. The two Bladers launch their Beys, and Dragoon quickly vanishes to surprise Driger with a down attack. Driger easily evades the attack, but the announcers find out that Driger is spinning counter-clockwise! The two Beys continue to clash until Ray decides to use his special attack - Tiger Claw Attack. Because of that, the announcers are surprised that Ray already went in for his strongest attack, and Dragoon is sent flying, with chips damaged and broken. Tyson then doesn't believe that he has lost, as Driger had defeated Dragoon in one hit. Tyson then looks at his broken Dragoon and imagines that his Bey was ripped by a real tiger. Ray then gets too cocky and begins to leave, and says that Tyson is toast, because his Bey is broken, and because of a Bey being broken, he is disqualified unless he can fix his Bey, or find spare parts. Tyson sadly has no spare parts, but Kenny appears suddenly, with a few spare parts, Tyson and Ray's battles then resumes, with Ray telling Tyson good luck, thinking him actually like a strong opponent. Kenny and Tyson are then looking at parts, where Kenny shows Tyson a new Defense Ring that Dizzi created to withstand Driger's attacks.

After a few minutes, the second match begins with Tyson telling Ray that he will win the match this time. The two Bladers launch their Beys into battle once again, with fast rips, and Kenny notices that because of the parts' friction, Dragoon is overheating. Ray then uses his special attack, while Tyson tells Dragoon to counterattack. Kenny then notices that Dragoon's velocity caused Dragoon to create a tornado. Tyson then calls the attack, "Storm Attack", and unleashes it at Driger, with Ray giving Tyson credit that his power is great, but Ray then calls out Driger's Bit-Beast, shocking Tyson. Tyson then also summons Dragoon's beast, and the two Bladers use their special attacks, but Dragoon's attack is more powerful, causing Driger to get a stadium out, making Tyson win the match.

Ray walks to Tyson and says that he is really strong and that he enjoyed his match, Tyson then tells Ray that he was great too, and Tyson's friends come in to congratulate Tyson on his victory. Satisfied with his battle, Ray decides to leave, ultimately forfeiting the third battle. Tyson then makes friends with Ray, but he also has to fight Kai, a very strong opponent, in the final round. 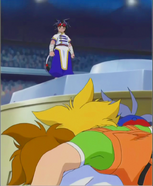 Add a photo to this gallery
Retrieved from "https://beyblade.fandom.com/wiki/Beyblade_-_Episode_06?oldid=440148"
Community content is available under CC-BY-SA unless otherwise noted.