It's All Relative (戦慄のアメリカン·パワー!, The Shivering American Power!) is the twentieth episode of the Beyblade: 2000.

After their non-competition loss to Emily of the All Starz at the BBA Research Center, the Bladebreakers sneak around the high-tech facility, hoping to learn more about their competition. There, they confront two other All Starz members, named Eddie and Steve, and Max learns more about his mother's job at the BBA - specifically, a rumor of why Max was not asked to join the All Starz team. 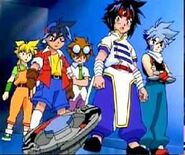 Add a photo to this gallery
Retrieved from "https://beyblade.fandom.com/wiki/Beyblade_-_Episode_20?oldid=403435"
Community content is available under CC-BY-SA unless otherwise noted.