For some strange reason, Mr. Dickenson sends the Bladebreakers to a remote mountain retreat to hone their blading skills for the upcoming American Tournament as well as to get Kenny and Dizzi to figure out a way to increase Ray's Bit-Beast's power.

Once there, they meet up with an enthusiastic young boy named Antonio, who they think is there to train them. Turns out, Antonio is a pathetic Blader. Frustrated, the Bladebreakers question the reason why Mr. Dickenson would send them all the way up to the middle of nowhere to train without any decent equipment. Turns out, the BBA Chairman had an ulterior motive - to teach the boys a valuable lesson about the importance of practice. Even Kenny learns from this and is able to tweak Ray's Bey up a few notches. 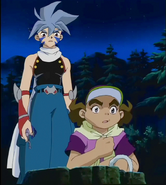 Add a photo to this gallery
Retrieved from "https://beyblade.fandom.com/wiki/Beyblade_-_Episode_21?oldid=406386"
Community content is available under CC-BY-SA unless otherwise noted.