Darkness at the End of the Tunnel... (強襲! 闇のブレーダー!, Assault! The Dark Bladers!) is the thirty-second episode of Beyblade: 2000.

After their train is mysteriously hijacked, the kids find themselves in the dark recesses of a tunnel. This is where the Bladebreakers meet a foursome of zombie-like ghouls, the Dark Bladers. Cenotaph grabs Kenny and his three team mates challenge the Bladebreakers for a fight in order to release Kenny. However, if they lose, they'll have their bit beasts captured.

Max and Tyson face off against Sanguinex and Lupinex, respectively a vampire and a werewolf. By making a cross with their Beyblades, they manage to beat Sanguinex, since vampires are scared of crosses. Ray then joins in with a silver coin he found on the train attached to his Beyblade in order to unleash a silver version of Driger that weakens and defeats Lupinex's blade.

When Cenotaph and Zomb are just about to start their rounds, an ambulance arrives, forcing the Dark Bladers to flee while the Bladebreakers are taken to safety. 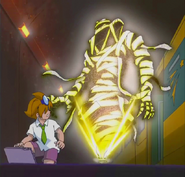 Add a photo to this gallery
Retrieved from "https://beyblade.fandom.com/wiki/Beyblade_-_Episode_32?oldid=430435"
Community content is available under CC-BY-SA unless otherwise noted.