Drawn to the Darkness

Drawn to the Darkness

He Who Seeks to Be the Strongest

Drawn to the Darkness (最強を望む者, He Who Seeks to Be the Strongest) is the forty-second episode of Beyblade: 2000.

Kai is torn between escaping the Abbey, or exploring it further in an attempt to unlock forgotten memories from his childhood. The Bladebreakers attempt to enter the abbey to track down their missing teammate, but are denied access by two of its bladers, Ian and Tala, under orders to stall them. Tyson battles Ian, who is able to hold him off until they are told to stop. Ian recalls Wyborg as Tala informs the Bladebreakers that Kai was found and that they're treating him after he "fell ill".

When Kai discovers the existence of Black Dranzer, the world's most powerful Beyblade, Boris offers it to him - but only if Kai quits the Bladebreakers forever and rejoins the Biovolt Corporation. Flooded with memories of using Black Dranzer as a child, and the lure of its dark, corrupting power, this leads Kai to accept Black Dranzer and rejoin BIOVOLT.

In the end, Boris is talking with Kai's grandfather, Voltaire. It turns out that Voltaire is behind BIOVOLT and he had planned to get Kai to join them, which they had succeeded in accomplishing. 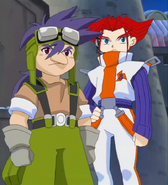 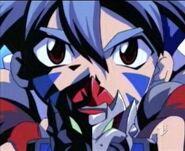 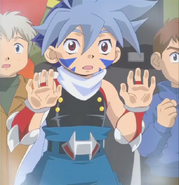 Add a photo to this gallery
Retrieved from "https://beyblade.fandom.com/wiki/Beyblade_-_Episode_42?oldid=430445"
Community content is available under CC-BY-SA unless otherwise noted.