The episode starts off with the All Starz leaving after their devastating defeat. They pass by the White Tigers without saying a word. Angered by Kai's actions, Mariah is eager to face Kai in the Tournament and set the All Starz' bit-beasts free. However, Lee, Gary, and especially Kevin are doubtful about facing the Demolition Boys after witnessing Kai's Black Dranzer in action. In spite of this, Mariah manages to convince Gary and Lee into battling, while Kevin still isn't up to it.

Meanwhile, Kai laughs off Tala's compliment on his performance over the All Starz, as he only intends to become stronger on his own. Though, Tala and the Demolition Boys decide to win the tournament with or without Kai. Boris then shows up and tells the rest of the team to face the White Tigers so that Kai can rest. However, Kai wants to face them himself with Black Dranzer and tells Boris to send the others home. Boris agrees to this and it is decided, with Boris secretly smiling knowing that Kai is doing exactly what he and Voltaire had hoped he would.

Later, the White Tigers begin to face off against only Kai from the Demolition Boys. One by one, they fall before the power of Black Dranzer and watch, horrified, as their Beyblades are destroyed and their Bit-Beasts are absorbed into Black Dranzer (except Kevin since he didn't want to take part in getting revenge).

The Bladebreakers storm the abbey in a desperate attempt to free their former teammate, who's currently training for the next battle. As Kenny, Max and Ray are captured and kicked out, Tyson stumbles into BIOVOLT's secret lab and learns the truth about Kai's past from a gloating Boris. Tyson refuses to give up on his friend until Kai hands over his old Dranzer Beyblade and tells him to leave. Tyson leaves the Abbey with Dranzer in his hand, much to the surprise of the other Bladebreakers as he breaks down over the thought of their friend turning to the dark side. 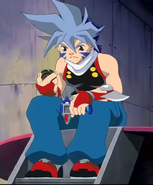 Add a photo to this gallery
Retrieved from "https://beyblade.fandom.com/wiki/Beyblade_-_Episode_44?oldid=430447"
Community content is available under CC-BY-SA unless otherwise noted.