Now that Kai is finally loyal to the 'Bladebreakers', he returns Black Dranzer to Boris, doing severe damage to the enemy headquarters in the process. Voltaire orders the operation to proceed, and Boris brings in the Demolition Boys to get the job done.

Meanwhile, Mr. Dicksenson and Grandpa arrive and they explain the true reason why the Bladebreakers were formed in the first place. The group also learn that Mr. Dickenson sent them the tape with Tyson's father, who also arrives, talking about his bit-beast research.

It is revealed that Biovolt is creating a breed of powerful, savage, Bit-Beasts that are designed for War...and the plan is to use them to take over the entire World. The Demolition Boys attack the BBA bus, and Max bravely battles to save his friends. Unfortunately, he loses his Bit-Beast Draciel in the process. 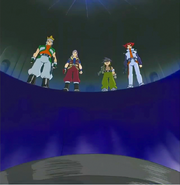