Victory in Defeat (カイの選択, Kai's Choice) is the forty-eighth episode of Beyblade: 2000.

The World Championship Finals are about to begin and Kai insists on Beybattling first, hoping his knowledge of the Demolition Boys will give him an advantage over Spencer. But in the first set, Seaborg, Spencer's whale Bit Beast, uses the water in the Black Sea Bowl to create a tsunami, which overwhelms Dranzer.

Kai is desperate for victory and Voltaire makes him a tempting offer: the power of Black Dranzer in exchange for betraying his friends and stealing their Bit Beasts. Kai puts Black Dranzer's Bit chip in his Beyblade, but he unleashes Dranzer instead and launches his special attack towards Spencer's Seaborg. However, his power is not enough and he loses the second round, with Dranzer being captured next.

Despite Sergei's victory, Voltaire is angry and vows to destroy Kai and his team mates for betraying him and not using Black Dranzer. 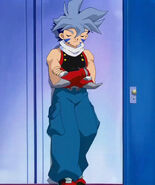 Add a photo to this gallery
Retrieved from "https://beyblade.fandom.com/wiki/Beyblade_-_Episode_48?oldid=430451"
Community content is available under CC-BY-SA unless otherwise noted.